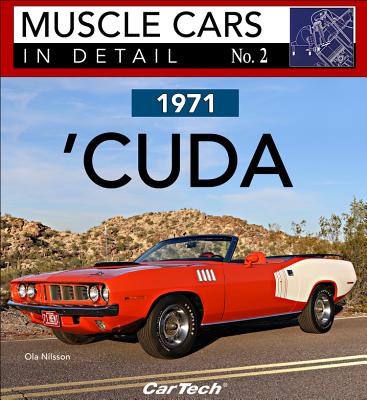 Learn what makes the 1971 Plymouth '��Cuda so desirable!

Provides an introduction and historical overview, an explanation of the design and concepts involved in creating the car, a look at marketing and promotion, an in-depth study of all hardware and available options, as well as an examination of where the car is on the market today. Includes are paint and option codes, VIN and build tag decoders, as well as sales numbers, and much more.

By 1971, the handsome Barracuda had established itself as one of the best-performing cars in the marketplace. Ordering the '��Cuda, owners with such stout engine packages could lay waste to Mustang and Camaro owners. Sales numbers never did match that of its cross-town rivals, but in the end, the 1971 '��Cuda won the war. No other mass-production Pony Car can consistently claim asking prices of $2,000,000 for its top model (in today's prices).

When the Barracuda arrived in the Plymouth lineup in mid-1964, it was given a daunting task: compete against the new Ford Mustang. Out the gate, it was outsold by a 6 to 1 margin. Barracuda could always compete with Mustang in the performance category, but aesthetically it just wasn't accepted like its Ford Mustang and Chevrolet Camaro counterparts. That was until 1970, when a complete redesign in the E-Body platform turned the tide. In terms of performance, the 1970-1974 Barracudas and Challengers were every bit the measure of the Ford and GM offerings.