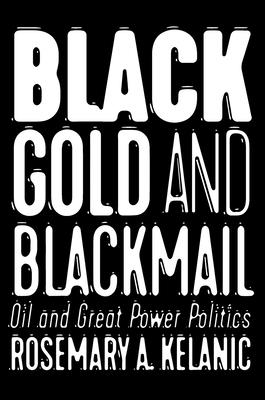 Black Gold and Blackmail seeks to explain why great powers adopt such different strategies to protect their oil access from politically motivated disruptions. In extreme cases, such as Imperial Japan in 1941, great powers fought wars to grab oil territory in anticipation of a potential embargo by the Allies; in other instances, such as Germany in the early Nazi period, states chose relatively subdued measures like oil alliances or domestic policies to conserve oil. What accounts for this variation? Fundamentally, it is puzzling that great powers fear oil coercion at all because the global market makes oil sanctions very difficult to enforce.

Rosemary A. Kelanic argues that two variables determine what strategy a great power will adopt: the petroleum deficit, which measures how much oil the state produces domestically compared to what it needs for its strategic objectives; and disruptibility, which estimates the susceptibility of a state's oil imports to military interdiction--that is, blockade. Because global markets undercut the effectiveness of oil sanctions, blockade is in practice the only true threat to great power oil access. That, combined with the devastating consequences of oil deprivation to a state's military power, explains why states fear oil coercion deeply despite the adaptive functions of the market.

Together, these two variables predict a state's coercive vulnerability, which determines how willing the state will be to accept the costs and risks attendant on various potential strategies. Only those great powers with large deficits and highly disruptible imports will adopt the most extreme strategy: direct control of oil through territorial conquest.

Rosemary A. Kelanic is an Assistant Professor of Political Science at the University of Notre Dame, where her research focuses on international security, coercive diplomacy, energy politics, and U.S. grand strategy.  Her book, Black Gold and Blackmail: Oil and Great Power Politics (Cornell University Press, 2020), explains why great powers adopt radically different strategies to secure oil access in case of emergency or war.

Kelanic has also published Crude Strategy: Rethinking the U.S. Military Commitment to Defend Persian Gulf Oil (Georgetown University Press, 2016), a book co-edited with Charles Glaser, which questions whether the United States needs to station military forces in the Gulf to protect the flow of oil.