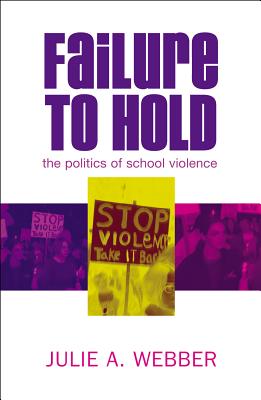 Failure to Hold: The Politics of School Violence

In Failure to Hold, Julie Webber examines the public's reaction to school violence in the United States in the late 1990s and articulates how theories of school violence omit important truths about young peoples' contributions to healthy societies and political systems. Analyzing three of the media's favorite cases of school violence--West Paducah, Jonesboro, and Springfield--and three popular explanations for such violence--easy access to guns, popular culture, and psychiatric illness--she illuminates the ideas these explanations disregard and the uses of culture they deny, including the practice of democracy in public spaces such as schools. Failure to Hold underscores the impossible stricture that the American public attempts to impose on students: to contain the anger and rage that they feel toward society. To explain this phenomenon, Webber revives the Marxist notion of the hidden curriculum. Popular culture intensifies the powers of the hidden curriculum by collapsing the distinction between school and society. The title of this book signals the end of U.S. democracy's vital hold on youth rebellions that used to contribute positively to open, free societies. However, in a culture where each person's next move can be anticipated and channeled into consumer demand and moral censorship, youth rebellion is the next plotline in a Hollywood film, subject of the family drama, or market for designer pharmaceuticals. The hidden curriculum organizes our normative environment and students write the hidden curriculum for us, in bullets and bombs.
Failure to Hold: The Politics of School Violence