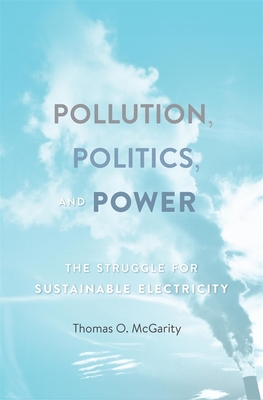 Pollution, Politics, and Power: The Struggle for Sustainable Electricity

The electric power industry has been transformed over the past forty years, becoming more reliable and resilient while meeting environmental goals. A big question now is how to prevent backsliding.

But these beneficial changes have come with costs. The once-powerful coal industry is on the edge of ruin, with existing coal-fired plants closing and coal mines shutting down. As a result, communities throughout Appalachia suffer from high unemployment and reduced resources, which have exacerbated a spiraling opioid epidemic. The Trump administration's efforts to revive the coal industry by scaling back environmental controls and reregulating electricity prices have had little effect on the coal industry's decline.

Major advances therefore come with warning signs, which we must heed in charting the continuing course of sustainable electricity. In Pollution, Politics, and Power, Thomas O. McGarity examines the progress made, details lessons learned, and looks to the future with suggestions for building a more sustainable grid while easing the economic downsides of coal's demise.

Pollution, Politics, and Power: The Struggle for Sustainable Electricity

A former Articles Editor of the Texas Law Review, Professor McGarity is a leading scholar in the fields of both administrative law and environmental law. He also teaches torts.