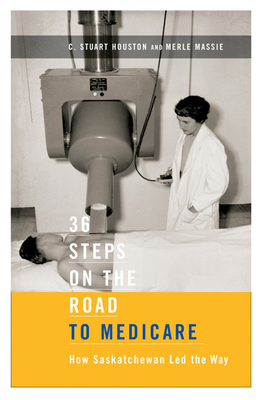 36 Steps on the Road to Medicare: How Saskatchewan Led the Way

The co-operative spirit of citizens in twentieth-century Saskatchewan nurtured innovation in health care and health policy. 36 Steps on the Road to Medicare showcases the decisions that led to the province's medicare system - the forerunner of Canadian health care. Stuart Houston and Merle Massie document the range of Saskatchewan leadership on Canadian, North American, and world stages: municipal doctors and municipal hospitals, the first Red Cross Outpost Hospital in the British Empire, tuberculosis diagnosis and treatment, a successful pilot comprehensive regional health care plan, government-sponsored cancer clinics, innovative LSD and patient-oriented treatment for psychoses, the first full-time cancer physicist in Canada, and the world's first concerted clinical use of the betatron and Cobalt-60 in cancer treatment. They show how North America's first social-democratic government, the Co-operative Commonwealth Federation - elected in 1944 and led by the incomparable Tommy Douglas - created the blueprint for comprehensive health care and how sequential steps on the road to medicare were implemented quickly and within budget. When federal support for national hospitalization became available, Saskatchewan could afford to initiate medicare in 1962. Other Canadian provinces soon followed Saskatchewan's lead. Updated to engage with current debates, 36 Steps on the Road to Medicare navigates the history of medicare and demonstrates the spirit of innovation that Canada will need to save it.
36 Steps on the Road to Medicare: How Saskatchewan Led the Way