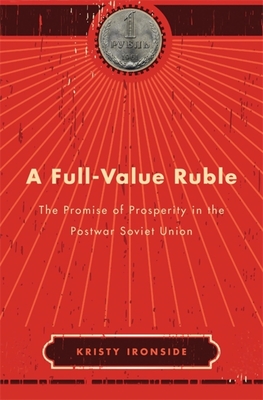 A Full-Value Ruble: The Promise of Prosperity in the Postwar Soviet Union

A new history shows that, despite Marxism's rejection of money, the ruble was critical to the Soviet Union's promise of shared prosperity for its citizens.

In spite of Karl Marx's proclamation that money would become obsolete under Communism, the ruble remained a key feature of Soviet life. In fact, although Western economists typically concluded that money ultimately played a limited role in the Soviet Union, Kristy Ironside argues that money was both more important and more powerful than most histories have recognized. After the Second World War, money was resurrected as an essential tool of Soviet governance. Certainly, its importance was not lost on Soviet leaders, despite official Communist Party dogma. Money, Ironside demonstrates, mediated the relationship between the Soviet state and its citizens and was at the center of both the government's and the people's visions for the maturing Communist project. A strong ruble--one that held real value in workers' hands and served as an effective labor incentive--was seen as essential to the economic growth that would rebuild society and realize Communism's promised future of abundance.

Ironside shows how Soviet citizens turned to the state to remedy the damage that the ravages of the Second World War had inflicted upon their household economies. From the late 1940s through the early 1960s, progress toward Communism was increasingly measured by the health of its citizens' personal finances, such as greater purchasing power, higher wages, better pensions, and growing savings. However, the increasing importance of money in Soviet life did not necessarily correlate to improved living standards for Soviet citizens. The Soviet government's achievements in raising the people's material welfare continued to lag behind the West's advances during a period of unprecedented affluence. These factors combined to undermine popular support for Soviet power and confidence in the Communist project.

A Full-Value Ruble: The Promise of Prosperity in the Postwar Soviet Union

Biography: Kristy Ironside is a historian of modern Russia and the Soviet Union. She is especially interested in the political, economic, and social history of Russia and the USSR’s twentieth century. Her first book, A Full-Value Ruble: The Promise of Prosperity in the Postwar Soviet Union, was published with Harvard University Press in 2021.

This book looks at how money, an ideologically problematic ‘vestige of capitalism,’ was mobilized by the Soviet government in the intertwined projects of recovering from the Second World War’s damage and building a prosperous communist society. Her articles have appeared in Kritika: Explorations in Russian and Eurasian History, The Soviet and Post-Soviet Review, Slavic Review, Europe-Asia Studies, and The Journal of Social History. Ironside is in the early stages of a new project looking at Russia and the USSR’s fraught relationship to international copyright protections from capitalism to communism, and back to capitalism again.

This research is funded by a Social Sciences and Humanities Research Council Insight Development Grant and the Fonds de Recherche du Québec - Société et Culture, soutien à la recherche pour la relève professorale. She is also working on a biography/microhistory of Helen Black, the Soviet Union’s registered foreign agent in America responsible for the official distribution of photographs, music, and literature there, looking more broadly at the business of Soviet soft power under Stalin.

Dr. Ironside is open to working with graduate students on projects exploring Soviet and Eastern European social, political, and economic history, as well as international history.