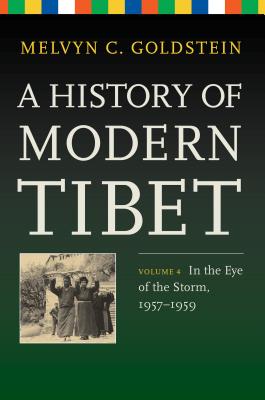 It is not possible to understand contemporary politics between China and the Dalai Lama without understanding what happened in the 1950s, especially the events that occurred in 1957-59. The fourth volume of Melvyn C. Goldstein's History of Modern Tibet series, In the Eye of the Storm, provides new perspectives on Sino-Tibetan history during the period leading to the Tibetan Uprising of 1959. The volume also reassesses issues that have been widely misunderstood as well as stereotypes and misrepresentations in the popular realm and in academic literature (such as in Mao's policies on Tibet). Volume 4 draws on important new Chinese government documents, published and unpublished memoirs, new biographies, and a large corpus of in-depth, specially collected political interviews to reexamine the events that produced the March 10th uprising and the demise of Tibet's famous Buddhist civilization. The result is a heavily documented analysis that presents a nuanced and balanced account of the principal players and their policies during the critical final two years of Sino-Tibetan relations under the Seventeen-Point Agreement of 1951.
A History of Modern Tibet, Volume 4: In the Eye of the Storm, 1957-1959

Dr. Goldstein is a socio-cultural anthropologist specializing in Tibetan society. His topical interest include family and marriage (polyandry), cross-cultural and global aging, population studies, cultural ecology and economic development/change. He has conducted research in Tibet (Tibet Autonomous Region of China) on a range of topics including nomadic pastoralism, the impact of economic reforms on rural Tibet, family planning and fertility, the revival of Buddhism, modern Tibetan history, and socio-economic change.

His has also conducted research in India (with Tibetan refugees), in northwest Nepal (with a Tibetan border community in Limi), in western Mongolia (with a nomadic pastoral community in Hovd province), in Kathmandu on family planning and intergenerational relations, and in eastern China on modernization and the elderly).

Dr. Goldstein’s current projects include: Editor of a large online Tibetan Oral History Archive with the Asia Division of the Library of Congress, an oral history of monks in Drepung Monastery in the traditional society, a longitudinal study of the impact of China’s reform policies on Tibetan nomads, and a study investigating modernization and changing patterns of the elderly and intergenerational relations in farming Tibet.