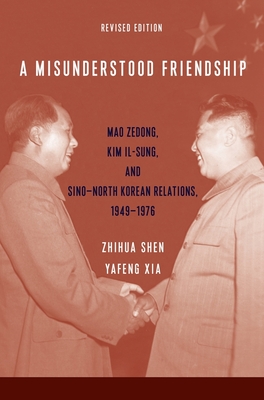 Today, the People's Republic of China is North Korea's only ally on the world stage, a tightly knit relationship that goes back decades. Both countries portray their partnership as one of brotherly affection based on shared political ideals--an alliance as tight as lips to teeth--even though relations have deteriorated in recent years due to China's ascendance and North Korea's intransigence.

In A Misunderstood Friendship, leading diplomatic historians Zhihua Shen and Yafeng Xia draw on previously untapped primary source materials revealing tensions and rivalries to offer a unique account of the China-North Korea relationship. They unravel the twists and turns in high-level diplomacy between China and North Korea from the late 1940s to the death of Mao Zedong in 1976. Based on unprecedented access to Chinese government documents, Soviet and Eastern European archives, and in-depth interviews with former Chinese diplomats and North Korean defectors, Shen and Xia reveal that the tensions that currently plague the alliance between the two countries have been present from the very beginning of the relationship. They significantly revise existing narratives of the Korean War, China's postwar aid to North Korea, Kim Il-sung's ideological and strategic thinking, North Korea's relations with the Soviet Union, and the importance of the Sino-U.S. rapprochement, among other issues. A Misunderstood Friendship adds new depth to our understanding of one of the most secretive and significant relationships of the Cold War, with increasing relevance to international affairs today.

Shen Zhihua was born in 1950. He is based in the East China Normal University, holding positions of Distinguished Professor of the Department of History for Life, Dean of the Institute for Studies of China’s Neighboring Countries and Regions?ISCNCR?, and Director of the Center for Cold War International History Studies?CCWIHS).