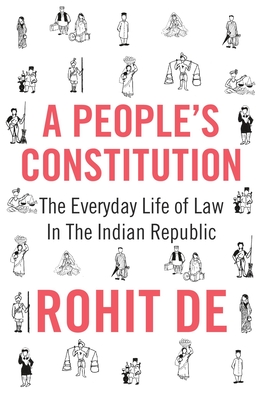 A People's Constitution: The Everyday Life of Law in the Indian Republic

It has long been contended that the Indian Constitution of 1950, a document in English created by elite consensus, has had little influence on India's greater population. Drawing upon the previously unexplored records of the Supreme Court of India, A People's Constitution upends this narrative and shows how the Constitution actually transformed the daily lives of citizens in profound and lasting ways. This remarkable legal process was led by individuals on the margins of society, and Rohit De looks at how drinkers, smugglers, petty vendors, butchers, and prostitutes--all despised minorities--shaped the constitutional culture.

The Constitution came alive in the popular imagination so much that ordinary people attributed meaning to its existence, took recourse to it, and argued with it. Focusing on the use of constitutional remedies by citizens against new state regulations seeking to reshape the society and economy, De illustrates how laws and policies were frequently undone or renegotiated from below using the state's own procedures. De examines four important cases that set legal precedents: a Parsi journalist's contestation of new alcohol prohibition laws, Marwari petty traders' challenge to the system of commodity control, Muslim butchers' petition against cow protection laws, and sex workers' battle to protect their right to practice prostitution. Exploring how the Indian Constitution of 1950 enfranchised the largest population in the world, A People's Constitution considers the ways that ordinary citizens produced, through litigation, alternative ethical models of citizenship.
A People's Constitution: The Everyday Life of Law in the Indian Republic

Rohit De is a lawyer and historian of modern South Asia and focuses on the legal history of the Indian subcontinent and the common law world.  As a legal historian he moves beyond asking what the law was; to what actors thought law was and how this knowledge shaped their quotidian tactics, thoughts and actions. In recent years, this has enabled his research to move beyond the political borders to South Asia to uncover transnational legal geographies of commerce, migration and rights across Africa, Southeast Asia and the Carribean.

Professor De’s book A People’s Constitution: Law and Everyday Life in the Indian Republic (Princeton University Press) explores how the Indian constitution, despite its elite authorship and alien antecedents, came to permeate everyday life and imagination in India during its transition from a colonial state to a democratic republic. Mapping the use and appropriation of constitutional language and procedure by diverse groups such as butchers and sex workers, street vendors and petty businessmen, journalists and women social workers, it offers a constitutional history from below. He continues to write on the social and intellectual foundations of constitutionalism in South Asia.

He is current research focuses around two major strands; the histories of political lawyering and the nature of the postcolonial state in South Asia.

The first, supported by the Social Science Research Council, stands at the intersection of multiple fields: histories of human rights; decolonization and the Cold War; diaspora studies; and history of the legal profession. Rights from the Left: Decolonization, Diasporas and a Global History of Rebellious Lawyering , demonstrates how events conventionally understood as “national political trials” in Kenya, Tanzania, Ghana, Seychelles, India, Pakistan, Sri Lanka, Malaysia, Singapore, British Guyana and the United Kingdom were produced by, and as part of, a transnational movement for civil liberties in the 1950s.

The project follows the careers of lawyers who defended unpopular causes across space and time, to offer an alternate history of universal rights and civil liberties that arise out of Asia and Africa and is mediated through India, Chinese and Caribbean diasporas.

His interest in lawyering and legal practice and the hegemonic role played by lawyers in colonial Indian politics, is leading to a series of essays tracing the connections between the everyday legal practice of South Asia’s nationalist leaders like Motilal Nehru, Jinnah and Dr. Ambedkar and the evolution of their political thought.

The second traces the evolution of the postcolonial developmental state  in India through different methods, including the disciplining of the economy through criminal law in the 1960s and 70s; and through the collective biographies of the women in the Indian Constituent Assembly.

Prof De is also interested in comparative constitutional law and is an Associate Research Scholar in Law at the Yale Law School. He has assisted Chief Justice K.G. Balakrishnan of the Supreme Court of India and worked on constitution reform projects in Nepal and Sri Lanka. He writes on contemporary legal issues in South Asia.

Prof De received his Ph.D from Princeton University, where he was elected to the Society of Woodrow Wilson Scholars. His dissertation won the Law and Society Association Prize for best representing outstanding work in law and society research in 2013. He was the Mellon Postdoctoral Fellow at the Centre for History and Economics and a fellow of Trinity Hall at the University of Cambridge before coming to Yale in 2014.  Rohit received his law degrees from the Yale Law School and the National Law School of India University, Bangalore.

Rohit teaches undergraduate and graduate courses in South Asian history; postcolonial histories of India, Pakistan and Bangladesh; on Indian constitutional culture and political thought, South Asian diasporas and migration as well as courses on global legal history, law and colonialism and the legal profession. You can learn more about Prof De’s work in his interview in the Yale Historical Review and to the Macmillan Report.