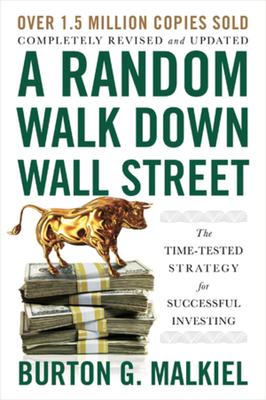 A Random Walk Down Wall Street: The Time-Tested Strategy for Successful Investing

Whether you're considering your first 401k contribution, contemplating retirement, or anywhere in between, A Random Walk Down Wall Street is the best investment guide money can buy. In this new edition, Burton G. Malkiel shares authoritative insights spanning the full range of investment opportunities--including valuable new material on cryptocurrencies like bitcoin, and tax-loss harvesting--to help you chart a calm course through the turbulent waters of today's financial markets.

A Random Walk Down Wall Street: The Time-Tested Strategy for Successful Investing

Burton Gordon Malkiel, the Chemical Bank Chairman’s Professor of Economics, has been a popular teacher of generations of Princeton students and is responsible for a revolution in the field of investment management. His book, A Random Walk Down Wall Street, first published in 1973, used new research on asset returns and the performance of asset managers to recommend that all investors use passively managed “index” funds as the core of their investment portfolios. An index fund simply buys and holds the securities available in a particular investment market. There were no publicly available index funds when Random Walk first advanced this recommendation, and investment professionals loudly decried the idea. Today, indexing has been adopted around the world. Random Walk was published in a 10th edition in 2011. It has sold more than 1.5 million copies and has been translated into nine languages. It is widely regarded as one of the most influential books in the history of the field of investment management.

Burt was born in Boston, Massachusetts, on August 28, 1932. He attended the Boston Public Latin School (1949), Harvard College (1953), and Harvard Graduate School of Business (1955). After a three-year tour as a first lieutenant in the U.S. Army Finance Corps, he joined the investment firm of Smith, Barney & Co. as an investment banker. He received his Ph.D. from Princeton in 1964 and joined the faculty that year.

Burt’s scholarship has concentrated on understanding the pricing of financial assets. His first book, The Term Structure of Interest Rates, published by Princeton University Press, focused on the relationship between short-term and long-term rates of interest. What followed were books on reform of the international monetary system, the options market, forecasting, emerging markets, the Chinese economy, and a number of books and articles on investment management. During his career he has published 12 books and more than 150 articles in addition to numerous op-ed columns and book reviews.

While most of Burt’s published work has focused on the stock market and optimal investment management, he has tackled an unusually broad set of topics. He has published in a number of areas including international monetary arrangements, tax and expenditure policy, money and banking, alternative investment markets, and the Chinese and other emerging economies. His published work has received several honorific prizes. He has served as president of the American Finance Association and has received lifetime achievement awards from professional investment organizations. He is also a fellow of the American Philosophical Society.

Burt has also been an active University citizen. He has twice chaired the Department of Economics and Princeton’s Financial Research Center, a precursor of today’s Bendheim Center for Finance. He has served on a number of University committees, including the Faculty Advisory Committee on Appointments and Advancements. He chaired the committee that established University policy on investing in South Africa and was a key member of the committee that established Princeton’s endowment spending policy. He also chaired the steering committee that planned Princeton’s 250th anniversary celebration. During the anniversary, Princeton expanded its motto “in the nation’s service” to include “and in the service of all nations.” At that time the University also established the Pace Center for Civic Engagement, which Burt was instrumental in conceptualizing, and for which he secured the major funding.

Burt spent two periods away from Princeton. From 1975 to 1977, he served on the President’s Council of Economic Advisers in Washington, D.C. He spent 1981 to 1988 in New Haven as dean of the Yale School of Organization and Management and the William S. Beinecke Professor of Management Studies.

During his career, Burt has served on government advisory committees and on several corporate boards of directors. He helped the U.S. Securities and Exchange Commission review its disclosure rules and the Chartered Financial Analysts Institute set up its guidelines for investor education. His numerous corporate board memberships have included Prudential Financial (where he chaired the Investment Committee of the board), the American Stock Exchange, and the Vanguard Group (for which he has lectured on investor education in the United States, Latin America, Australia, and Asia). While he was at Yale, he served on the board of the Princeton University Investment Company, and he has served on the investment committees for several charitable foundations.

Burt has taught large undergraduate courses at Princeton in macroeconomics, corporate finance, and investment markets, as well as a graduate course in money and banking. His undergraduate courses have always been highly rated and extremely popular. He has influenced generations of Princetonians to pursue careers in academia and in the financial community. The lasting impact of his teaching is substantial.