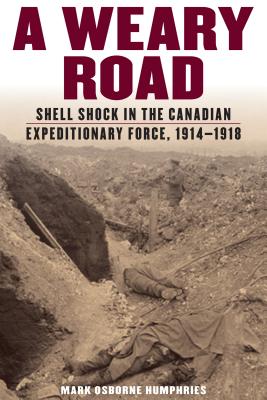 A Weary Road: Shell Shock in the Canadian Expeditionary Force, 1914-1918

More than 16,000 Canadian soldiers suffered from shell shock during the Great War of 1914 to 1918. Despite significant interest from historians, we still know relatively little about how it was experienced, diagnosed, treated, and managed in the frontline trenches in the Canadian and British forces.

How did soldiers relate to suffering comrades? Did large numbers of shell shock cases affect the outcome of important battles? Was frontline psychiatric treatment as effective as many experts claimed after the war? Were Canadians treated any differently than other Commonwealth soldiers? A Weary Road is the first comprehensive study to address these important questions. Author Mark Osborne Humphries uses research from Canadian, British, and Australian archives, including hundreds of newly available hospital records and patient medical files, to provide a history of war trauma as it was experienced, treated, and managed by ordinary soldiers.

A Weary Road: Shell Shock in the Canadian Expeditionary Force, 1914-1918

I am originally from Gravenhurst, Ont., and completed my Honors BA and MA in history here at Wilfrid Laurier University. I then received my PhD in history from the University of Western Ontario in early 2009.

As a researcher, I am primarily focused on the First World War and its aftermath, exploring the medical and social effects of war on people’s lives and the development of the state. I have written on the 1918 influenza pandemic, shell shock, self-inflicted wounds, and domestic discontent as well as the operational history of the Canadian Expeditionary Force, including the life of Arthur Currie, tactics, and the experience of soldiers in the trenches.

I am also co-editor of a five-volume series of translations from the German official history of the Great War, Der Weltkrieg, titled Germany’s Western Front.

I am currently working on a book on shell shock in the Canadian Expeditionary Force (CEF), specifically examining how the concept of shell shock evolved from the masculine culture of the trenches and became a site of negotiation between soldiers, doctors, and senior officers.

This is the first of two volumes, the second of which will look at how shell shock and wartime trauma shaped the life experience of veterans and their families through to the 1970s. Both are funded by a major SSHRC Insight Grant, Through Veterans’ Eyes, which will allow us to digitize more than 12 million pages of records documenting the lives of Great War veterans.