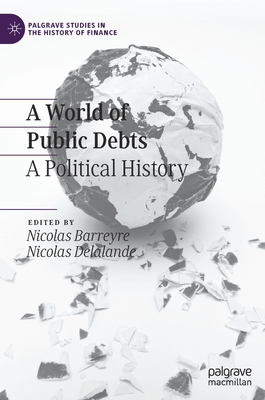 A World of Public Debts: A Political History

This book analyzes public debt from a political, historical, and global perspective. It demonstrates that public debt has been a defining feature in the construction of modern states, a main driver in the history of capitalism, and a potent geopolitical force. From revolutionary crisis to empire and the rise and fall of a post-war world order, the problem of debt has never been the sole purview of closed economic circles. This book offers a key to understanding the centrality of public debt today by revealing that political problems of public debt have and will continue to need a political response.

Today's tendency to consider public debt as a source of fragility or economic inefficiency misses the fact that, since the eighteenth century, public debts and capital markets have on many occasions been used by states to enforce their sovereignty and build their institutions, especially in times of war. It is nonetheless striking to observe that certain solutions that were used in the past to smooth out public debt crises (inflation, default, cancellation, or capital controls) were left out of the political framing of the recent crisis, therefore revealing how the balance of power between bondholders, taxpayers, pensioners, and wage-earners has evolved over the past 40 years.

Today, as the Covid-19 pandemic opens up a dramatic new crisis, reconnecting the history of capitalism and that of democracy seems one of the most urgent intellectual and political tasks of our time. This global political history of public debt is a contribution to this debate and will be of interest to financial, economic, and political historians and researchers.

Chapters 13 and 19 are available open access under a Creative Commons Attribution 4.0 International License via link.springer.com.

A World of Public Debts: A Political History

Nicolas Barreyre is Associate Professor in American History at the École des hautes études en sciences sociales (EHESS) in Paris and author of The Politics of Economic Crises: The Panic of 1873, the End of Reconstruction, and the Realignment of American Politics (2011).

Nicolas Barreyre is a lecturer at the EHESS, and in 2015-2016 faculty fellow at the Charles Warren Center in Harvard. His first book,  L'or et la liberté (Éditions de l'EHESS, 2014) explores the spatial dimension of American political history, and offers a reinterpretation of the Reconstruction period that integrates political economy issues into questions citizenship and race relations. Her current work focuses on the organization and forms of the American state in the nineteenth century, and is particularly interested in the institutional effects of political economy, and the links it forges between citizens and the political system. State.

He is also a member of the editorial board of the Annales. History, Social Sciences .