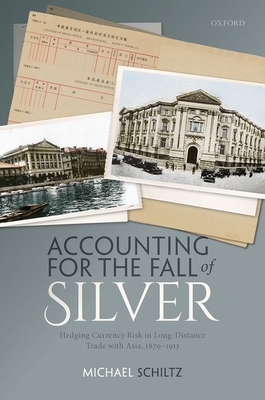 Accounting for the Fall of Silver: Hedging Currency Risk in Long-Distance Trade with Asia, 1870-1913

The second half of the nineteenth century is correctly known to have culminated in the emergence of the gold standard as the first truly international monetary regime. The processes leading up to this remarkable feat are, however, far less documented or understood. Economic historians have only recently started digging into the causes behind the 'fall of silver' that preceded the scramble for gold. It is nowadays clear that its effects were felt worldwide. Not in the least, silver depreciation severely affected East-West trade. It was, among other factors, behind the bankruptcy of several powerful institutions as the Oriental Bank Corporation. Yet at the same time, it cemented the position of other banks, some of which exist until this very day (HSBC, Standard Chartered). What did these banks know that others did not?

In Accounting for the Fall of Silver, Michael Schiltz explains that the 1870s and 1880s witnessed furious experiments with new financial products and, equally important, strategies for hedging exchange rate risk. Drawing on archives that have never been used before, the book throws new light on an important episode of nineteenth century world history. At the same time, it illuminates lesser known aspects of the first gold standard period. It draws attention to the existence of 'carry trades' between European money markets and the lesser liquid Asian periphery; and describes the creation of financial contracts with the sole aim of enabling commodity finance among Asian mercantile centers.

Accounting for the Fall of Silver: Hedging Currency Risk in Long-Distance Trade with Asia, 1870-1913

As a financial historian, I am fascinated by the ways in which money and finance have made modern society tick, especially since the ‘first globalization’ (1870-1914), a period that coincides with the proliferation of the gold standard on a global scale. Of particular interest to me are are the so-called network effects that are innate to currencies when it comes to their role as means of settling international trade.

As we know from the historical record, network effects produce and reproduce center-periphery constellations with strong consequences for the way both center and periphery come to terms with more or less identical problems. This center-periphery dynamic was the crux of my first book project on imperial Japan’s definition of monetary regimes in the empire’s own periphery (Taiwan, Korea, Northeast China and Manchuria). It also figures strongly in my second, now completed, book project on the managing practice within the country’s semi-national exchange bank, the Yokohama Specie Bank. In charge of boosting Japanese trade with both the world’s leading economic powerhouses and the Asian Hinterland, its bankers were profoundly aware of the schisms between the former and the latter.

As the book demonstrates, it defined the bank’s role and evolution in the steadily expanding Japanese influence on the Asian mainland.

I also have a not so secret double-life as an explorer of the digital revolution for scientific practice and communication. The latter has come to have a direct impact on my own research and teaching. I chose to document both through non-conventional means as e.g. twitter (@michaelschiltz) and GitHub (https://github.com/michaelschiltz)

In my classes, the multilingual aspect is key. It is very refreshing when different students engage with primary and secondary sources in Japanese, English, Chinese, Korean, etc. Both Japanese and non-Japanese students are warmly invited to participate in my courses. As the era in which we live has made the consultation of primary sources both practical and desirable, they will form the basis of presentations and discussions. Last, I tend to organize my classes in a very open, nonhierarchical way. Learning should be a fun and gratifying experience!