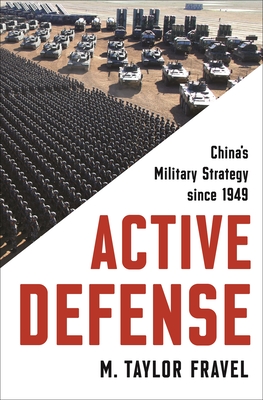 Since the 1949 Communist Revolution, China has devised nine different military strategies, which the People's Liberation Army (PLA) calls strategic guidelines. What accounts for these numerous changes? Active Defense offers the first systematic look at China's military strategy from the mid-twentieth century to today. Exploring the range and intensity of threats that China has faced, M. Taylor Fravel illuminates the nation's past and present military goals and how China sought to achieve them, and offers a rich set of cases for deepening the study of change in military organizations.

Drawing from diverse Chinese-language sources, including memoirs of leading generals, military histories, and document collections that have become available only in the last two decades, Fravel shows why transformations in military strategy were pursued at certain times and not others. He focuses on the military strategies adopted in 1956, 1980, and 1993--when the PLA was attempting to wage war in a new kind of way--to show that China has pursued major change in its strategic guidelines when there has been a significant shift in the conduct of warfare in the international system and when China's Communist Party has been united.

Delving into the security threats China has faced over the last seven decades, Active Defense offers a detailed investigation into how and why states alter their defense policies.