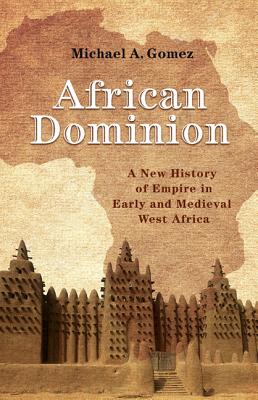 African Dominion: A New History of Empire in Early and Medieval West Africa

Pick up almost any book on early and medieval world history and empire, and where do you find West Africa? On the periphery. This pioneering book, the first on this period of the region's history in a generation, tells a different story. Interweaving political and social history and drawing on a rich array of sources, including Arabic manuscripts, oral histories, and recent archaeological findings, Michael Gomez unveils a new vision of how categories of ethnicity, race, gender, and caste emerged in Africa and in global history more generally. Scholars have long held that such distinctions arose during the colonial period, but Gomez shows they developed much earlier.

Focusing on the Savannah and Sahel region, Gomez traces the exchange of ideas and influences with North Africa and the Central Islamic Lands by way of merchants, scholars, and pilgrims. Islam's growth in West Africa, in tandem with intensifying commerce that included slaves, resulted in a series of political experiments unique to the region, culminating in the rise of empire. A major preoccupation was the question of who could be legally enslaved, which together with other factors led to the construction of new ideas about ethnicity, race, gender, and caste--long before colonialism and the transatlantic slave trade.

Telling a radically new story about early Africa in global history, African Dominion is set to be the standard work on the subject for many years to come.

African Dominion: A New History of Empire in Early and Medieval West Africa

Michael A. Gomez is currently Silver Professor of History and Middle Eastern and Islamic Studies at New York University, having served as the founding director of the Association for the Study of the Worldwide African Diaspora (ASWAD) from its inception in 2000 to 2007, and is currently series editor of the Cambridge Studies on the African Diaspora, Cambridge University Press.

He has chaired of the History departments at both NYU and Spelman College, and also served as President of UNESCO's International Scientific Committee for the Slave Route Project from 2009 to 2011.

His first book, Pragmatism in the Age of Jihad: The Precolonial State of Bundu (Cambridge University Press, 1992), examines a Muslim polity in what is now eastern Senegal. The next publication, Exchanging Our Country Marks: The Transformation of African Identities in the Colonial and Antebellum South (University of North Carolina Press, 1998), is concerned with questions of culture and race.

Gomez’s new book, African Dominion: A New History of Empire in Early and Medieval West Africa (Princeton University Press, early 2018), is a comprehensive study of polity and religion during the region’s iconic collective moment. Invested in an Arabic manuscript project disrupted by war (in Mali), arguably one of the most important endeavors of its kind in the twentieth and twenty-first centuries, Gomez remains supportive of the struggles of people of African descent worldwide.