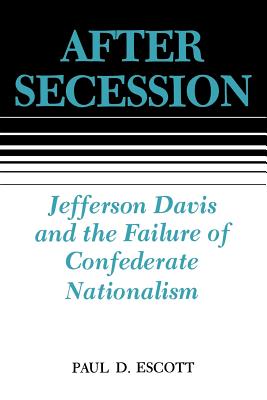 After Secession: Jefferson Davis and the Failure of Confederate Nationalism

The secession of the southern states from the Union was not merely a culmination of certain events; it was also the beginning of the trial of Confederate nationalism. The slaveholding elite which had led the South out of the Union now had to solidify its support among the nonslaveholding small farmers, a class that constituted the bulk of the white population.But Jefferson Davis and the new government were greatly hampered in their bid for widespread public support, partially because of the same force that had resulted in secession -- the strong states' rights predisposition of many southerners and their opposition to a strong central government -- and partially because of the great social and economic gap that separated the governed from the governors.In After Secession Paul Escott focuses on the challenge that the South's widespread political ideals presented to Jefferson Davis and on the way growing class resentments among citizens in the countryside affected the war effort. New material is included on Jefferson Davis and his policies, and interesting new interpretations of the Confederate government's crucial problems of decision making and failure to respond to the common people are offered. The result is both a fresh look at the pivotal role that strong leadership plays in the establishment of a new nation and a revealing study of how Jefferson Davis' frustrations increasingly affected the quality of his presidency.

After Secession: Jefferson Davis and the Failure of Confederate Nationalism