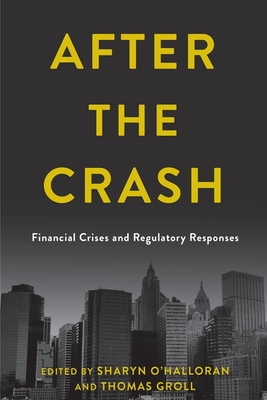 After the Crash: Financial Crises and Regulatory Responses

The 2008 crash was the worst financial crisis and the most severe economic downturn since the Great Depression. It triggered a complete overhaul of the global regulatory environment, ushering in a stream of new rules and laws to combat the perceived weakness of the financial system. While the global economy came back from the brink, the continuing effects of the crisis include increasing economic inequality and political polarization. After the Crash is an innovative analysis of the crisis and its ongoing influence on the global regulatory, financial, and political landscape, with timely discussions of the key issues for our economic future. It brings together a range of experts and practitioners, including Joseph Stiglitz, a Nobel Prize winner; former congressman Barney Frank; former treasury secretary Jacob Lew; Paul Tucker, a former deputy governor of the Bank of England; and Steve Cutler, general counsel of JP Morgan Chase during the financial crisis. Each poses crucial questions: What were the origins of the crisis? How effective were international and domestic regulatory responses? Have we addressed the roots of the crisis through reform and regulation? Are our financial systems and the global economy better able to withstand another crash? After the Crash is vital reading as both a retrospective on the last crisis and an analysis of possible sources of the next one.
After the Crash: Financial Crises and Regulatory Responses

Sharyn O'Halloran is the George Blumenthal Professor of Political Economy and Professor of International and Public Affairs at Columbia University in New York City. A political scientist and economist by training, O’Halloran has written extensively on issues related to the political economy of international trade and finance, regulation and institutional reform, economic growth and democratic transitions, and the political representation of minorities.

Her publications include Politics, Process and American Trade Policy (University of Michigan Press), Delegating Powers (Cambridge University Press), The Future of the Voting Rights Act (Russell Sage Foundation), as well as numerous journal articles on administrative procedures and agency design, with application to U.S. trade and financial regulatory policy, including those published in the American Journal of Political Science, the American Political Science Review, International Organization, Yale Law Journal, NYU Law Journal, and the Journal of Law, Economics and Organization.