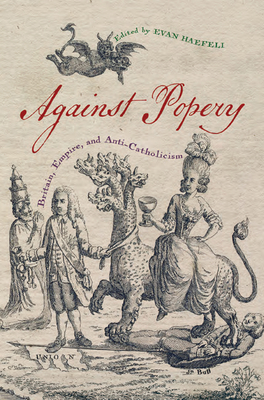 Against Popery: Britain, Empire, and Anti-Catholicism

Although commonly regarded as a prejudice against Roman Catholics and their religion, anti-popery is both more complex and far more historically significant than this common conception would suggest. As the essays collected in this volume demonstrate, anti-popery is a powerful lens through which to interpret the culture and politics of the British-American world.

In early modern England, opposition to tyranny and corruption associated with the papacy could spark violent conflicts not only between Protestants and Catholics but among Protestants themselves. Yet anti-popery had a capacity for inclusion as well and contributed to the growth and stability of the first British Empire. Combining the religious and political concerns of the Protestant Empire into a powerful (if occasionally unpredictable) ideology, anti-popery affords an effective framework for analyzing and explaining Anglo-American politics, especially since it figured prominently in the American Revolution as well as others.

Taking an interdisciplinary approach, written by scholars from both sides of the Atlantic working in history, literature, art history, and political science, the essays in Against Popery cover three centuries of English, Scottish, Irish, early American, and imperial history between the early sixteenth and early nineteenth centuries. More comprehensive, inclusive, and far-reaching than earlier studies, this volume represents a major turning point, summing up earlier work and laying a broad foundation for future scholarship across disciplinary lines.

Against Popery: Britain, Empire, and Anti-Catholicism