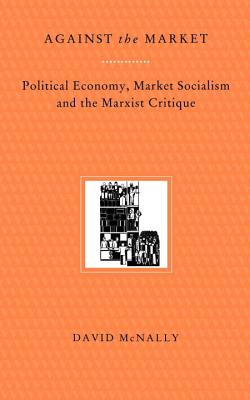 Against the Market: Political Economy, Market Socialism & the Marxist Critique

In this innovative book, David McNally develops a powerful critique of market socialism, by tracing it back to its roots in early political economy. He ranges from Adam Smith's attempt to reconcile moral philosophy with market economics to Malthus's reformulation of Smith's political economy which made it possible to justify poverty as a moral necessity. Smith's economic theory was also the source of an attempt to construct a critique of capitalism derived from his conception of free and equal exchange governed by natural price. This Smithian forerunner of today's market socialism sought to reform the market without abolishing the social relations on which it was based. McNally explores this tradition sympathetically, but exposes its fatal flaws.

The book concludes with an incisive consideration of efforts by writers such as Alec Nove to construct a feasible model of market socialism. McNally shows these efforts are still plagued by the failure of early Smithian socialism to come to grips with the social foundations of the market, the commodification of labor-power which is the key to market regulation of the economy. The results, he argues, are neither socialist nor workable.

Against the Market: Political Economy, Market Socialism & the Marxist Critique