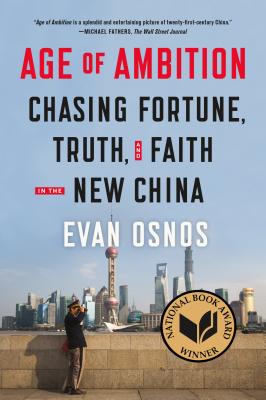 Age of Ambition: Chasing Fortune, Truth, and Faith in the New China

Winner of the 2014 National Book Award in nonfiction

A vibrant, colorful, and revelatory inner history of

China during a moment of profound transformation

From abroad, we often see China as a caricature: a nation of pragmatic plutocrats and ruthlessly dedicated students destined to rule the global economy-or an addled Goliath, riddled with corruption and on the edge of stagnation. What we don't see is how both powerful and ordinary people are remaking their lives as their country dramatically changes.
As the Beijing correspondent for The New Yorker, Evan Osnos was on the ground in China for years, witness to profound political, economic, and cultural upheaval. In Age of Ambition, he describes the greatest collision taking place in that country: the clash between the rise of the individual and the Communist Party's struggle to retain control. He asks probing questions: Why does a government with more success lifting people from poverty than any civilization in history choose to put strict restraints on freedom of expression? Why do millions of young Chinese professionals-fluent in English and devoted to Western pop culture-consider themselves angry youth, dedicated to resisting the West's influence? How are Chinese from all strata finding meaning after two decades of the relentless pursuit of wealth?
Writing with great narrative verve and a keen sense of irony, Osnos follows the moving stories of everyday people and reveals life in the new China to be a battleground between aspiration and authoritarianism, in which only one can prevail.

Age of Ambition: Chasing Fortune, Truth, and Faith in the New China

Evan Osnos joined The New Yorker as a staff writer in 2008 and covers politics and foreign affairs. His recent pieces include profiles of Joe Biden and Mark Zuckerberg, a history of the Republican Party in Greenwich, Connecticut, and a recounting of his visit to North Korea during the nuclear crisis. Sections of his book “Age of Ambition: Chasing Fortune, Truth, and Faith in the New China,” based on eight years of living in Beijing, first appeared in the magazine. The book won the 2014 National Book Award and was a finalist for the Pulitzer Prize. His most recent book is “Joe Biden: The Life, the Run, and What Matters Now.”

Previously, Osnos worked as Beijing bureau chief for the Chicago Tribune, where he was part of a team that won the 2008 Pulitzer Prize for investigative reporting. Before his assignment to China, he worked in the Middle East, reporting mostly from Iraq. He is a CNN contributor and a frequent guest on “The Daily Show,” “Fresh Air,” and other programs. He lives in Washington, D.C.