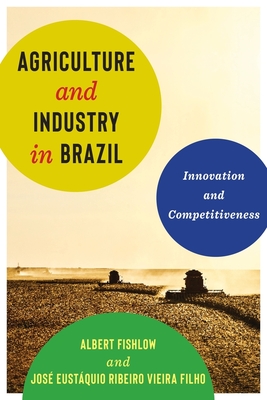 Agriculture and Industry in Brazil: Innovation and Competitiveness

Agriculture and Industry in Brazil is a study of the economics of Brazilian agriculture and industry, with a special focus on the importance of innovation to productivity growth. Albert Fishlow and Jos� Eust�quio Ribeiro Vieira Filho examine technological change in Brazil, highlighting the role of public policy in building institutions and creating an innovation-oriented environment.

Fishlow and Vieira Filho tackle the theme of innovation from various angles. They contrast the relationship between state involvement and the private sector in key parts of the Brazilian economy and compare agricultural expansion with growth in the oil and aviation sectors. Fishlow and Vieira Filho argue that modern agriculture is a knowledge-intensive industry and its success in Brazil stems from public institution building. They demonstrate how research has played a key role in productivity growth, showing how prudent innovation policies can leverage knowledge not only within a particular company but also across whole sectors of the economy. The book discusses whether and how Brazil can serve as a model for other middle-income countries eager to achieve higher growth and a more egalitarian distribution of income. An important contribution to comparative, international, and development economics, Agriculture and Industry in Brazil shows how the public success in agriculture became a prototype for advance elsewhere.

Agriculture and Industry in Brazil: Innovation and Competitiveness

Albert Fishlow has been improving our understanding of the economic history and development of Brazil and Latin America for six decades—and counting. He is professor emeritus at two institutions: the University of California, Berkeley, where he served as dean of international and area studies and spent 22 years as a member of the faculty, and Columbia University, where he was director of the Institute of Latin American Studies and the Center for the Study of Brazil until his retirement in 2007.

His career has included appointments at Yale University, where he directed the Center for International and Area Studies, and civil service as deputy assistant secretary of state for inter-American affairs during the Carter Administration. In the 1990s, Fishlow was a founder and first president of the Latin American and Caribbean Economic Association, regarded as the most successful society for economic research in the developing world.

In 1999, the Republic of Brazil awarded him the National Order of the Southern Cross, the country’s highest honor. Throughout the Americas, Fishlow is renowned for his exemplary scholarship, leadership, and mentorship of generations of Brazilian and American students.

Fishlow completed his bachelor’s degree at the University of Pennsylvania and his PhD in economics at Harvard in 1963. His dissertation, on the impact of American railroads on the antebellum economy, was a pathbreaking effort to apply quantitative techniques to historical research that would come to define the intellectual orientation of his scholarship.

His publications span the full breadth of his career; they include the first rigorous assessment of Brazilian income distribution following the rapid economic growth of the late 1960s, published in the American Economic Review in 1972, and his 2011 book Starting Over: Brazil Since 1985, the definitive economic history of Brazil since the restoration of democracy through the early 21st century. His latest book, Agriculture and Industry in Brazil, is scheduled for publication this year.