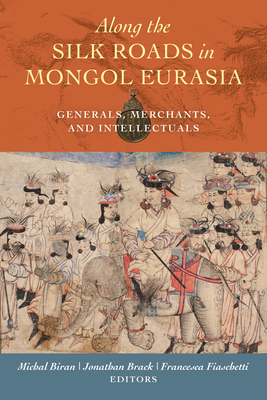 Along the Silk Roads in Mongol Eurasia: Generals, Merchants, and Intellectuals

During the thirteenth and fourteenth centuries, Chinggis Khan and his heirs established the largest contiguous empire in the history of the world, extending from Korea to Hungary and from Iraq, Tibet, and Burma to Siberia. Ruling over roughly two thirds of the Old World, the Mongol Empire enabled people, ideas, and objects to traverse immense geographical and cultural boundaries. Along the Silk Roads in Mongol Eurasia reveals the individual stories of three key groups of people--military commanders, merchants, and intellectuals--from across Eurasia. These annotated biographies bring to the fore a compelling picture of the Mongol Empire from a wide range of historical sources in multiple languages, providing important insights into a period unique for its rapid and far-reaching transformations.

Read together or separately, they offer the perfect starting point for any discussion of the Mongol Empire's impact on China, the Muslim world, and the West and illustrate the scale, diversity, and creativity of the cross-cultural exchange along the continental and maritime Silk Roads.

Features and Benefits:
Along the Silk Roads in Mongol Eurasia: Generals, Merchants, and Intellectuals

Prof. Michal Biran (PhD HUJI 2000) is a historian of Inner Asia and a member of the Israeli Academy of Science and Humanities.

She is the Max and Sophie Mydans Foundation Professor in the Humanities, teaches at the departments of Asian Studies and Islamic and Middle Eastern Studies, and is currently (2015) the director of the Louis Frieberg Center for East Asian Studies at the Hebrew University of Jerusalem, where she also leads the ERC-funded project “Mobility, Empire and Cross-Cultural Contacts in Mongol Eurasia.” (http://mongol.huji.ac.il/).

Together with Hodong Kim she is now editing The Cambridge History of the Mongol Empire (2 volumes) for Cambridge University Press. She has published extensively on Mongol and PreMongol Central Asia (10th-14th centuries); the Mongol Empire; nomadism; and cross-cultural contacts between China and the Islamic world. Her books include Qaidu and the Rise of the Independent Mongol State in Central Asia (Curzon, 1997), The Empire of the Qara Khitai in Eurasian History: Between China and the Islamic World (Cambridge University Press, 2005, 2008) and Chinggis Khan (Oxford: OneWorld Publications, 2007).