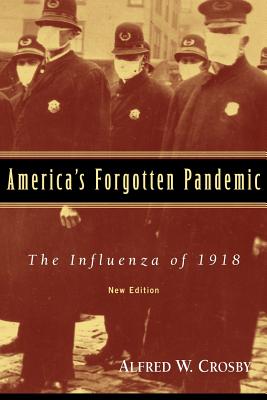 America's Forgotten Pandemic: The Influenza of 1918

Between August 1918 and March 1919 the Spanish influenza spread worldwide, claiming over 25 million lives, more people than those perished in the fighting of the First World War. It proved fatal to at least a half-million Americans. Yet, the Spanish flu pandemic is largely forgotten today. In this vivid narrative, Alfred W. Crosby recounts the course of the pandemic during the panic-stricken months of 1918 and 1919, measures its impact on American society, and probes the curious loss of national memory of this cataclysmic event. In a new edition, with a new preface discussing the recent outbreaks of diseases, including the Asian flu and the SARS epidemic, America's Forgotten Pandemic remains both prescient and relevant. Alfred W. Crosby is a Professor Emeritus in American Studies, History and Geography at the University of Texas at Austin, where he taught for over 20 years. His previous books include Throwing Fire (Cambrige, 2002), the Measure of Reality (Cambridge, 1997) and Ecological Imperialism (cambridge, 1986). Ecological Imperialism was the winner of the 1986 Phi Beta Kappa book prize. The Measure of Reality was chosen by the Los Angeles Times as one of the 100 most important books of 1997.
America's Forgotten Pandemic: The Influenza of 1918