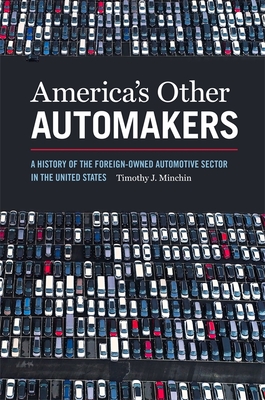 America's Other Automakers: A History of the Foreign-Owned Automotive Sector in the United States

In 2018 almost half of all vehicles made in North America were produced at foreign-owned plants, and the sector was on track to monopolize the market. Despite this, the industry has been overlooked compared with its domestic counterpart, both in scholarship and popular memory. Redressing this neglect, America's Other Automakers provides a new history of the foreignowned auto sector, the first to extensively draw on archival sources and to articulate the human agency of participants, including workers, managers, and industry recruiters.

Timothy J. Minchin challenges the view that the industry's growth primarily reflected incentives, stressing human agency and the complexity of individual stories instead. Deeply human in its approach, the book also explores the industry's impact on grassroots communities, showing that it had more costs than supporters acknowledged. Drawing on a wide range of primary and secondary sources, America's Other Automakers uncovers significant tensions over unionization, reports of discriminatory hiring, and unease about the industry's rapid growth, critically exploring seven large assembly facilities and their impact on the communities in which they were built.

America's Other Automakers: A History of the Foreign-Owned Automotive Sector in the United States