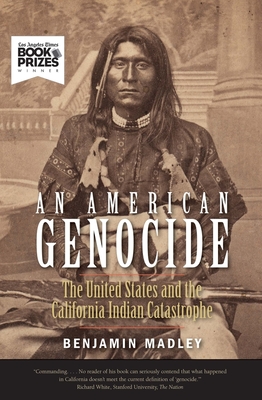 An American Genocide: The United States and the California Indian Catastrophe, 1846-1873

Winner of the 2016 Los Angeles Times Book Award for History

Gruesomely thorough. . . . Others have described some of these campaigns, but never in such strong terms and with so much blame placed directly on the United States government.--Alexander Nazaryan, Newsweek

Between 1846 and 1873, California's Indian population plunged from perhaps 150,000 to 30,000. Benjamin Madley is the first historian to uncover the full extent of the slaughter, the involvement of state and federal officials, the taxpayer dollars that supported the violence, indigenous resistance, who did the killing, and why the killings ended. This deeply researched book is a comprehensive and chilling history of an American genocide.

Madley describes pre-contact California and precursors to the genocide before explaining how the Gold Rush stirred vigilante violence against California Indians. He narrates the rise of a state-sanctioned killing machine and the broad societal, judicial, and political support for genocide. Many participated: vigilantes, volunteer state militiamen, U.S. Army soldiers, U.S. congressmen, California governors, and others. The state and federal governments spent at least $1,700,000 on campaigns against California Indians. Besides evaluating government officials' culpability, Madley considers why the slaughter constituted genocide and how other possible genocides within and beyond the Americas might be investigated using the methods presented in this groundbreaking book.

An American Genocide: The United States and the California Indian Catastrophe, 1846-1873

Benjamin Madley is an historian of Native America, the United States, and colonialism in world history. Born in Redding, California, he spent much of his childhood in Karuk Country near the Oregon border where he became interested in relationships between colonizers and Indigenous peoples. Educated at Yale and Oxford, he writes about Native Americans as well as colonialism in Africa, Australia, and Europe, often applying a transnational and comparative approach.

Yale University Press published his first book, An American Genocide: The United States and the California Indian Catastrophe, 1846-1873. This book received the Los Angeles Times Book Prize for History, the Raphael Lemkin Book Award from the Institute for the Study of Genocide,  the Charles Redd Center / Phi Alpha Theta Award for the Best Book on the American West, the California Book Awards Gold Medal for Californiana, the Heyday Books History Award, and the Norman Neuerburg Award from the Historical Society of Southern California.

According to former California Governor Jerry Brown, "Madley corrects the record with his gripping story of what really happened: the actual genocide of a vibrant civilization, thousands of years in the making."

Madley's current research explores Native American migration and labor in the making of the western United States. Meanwhile, he is  co-editing The Cambridge World History of Genocide, Volume 2: Genocide in the Indigenous, Early Modern, and Imperial Worlds, 1535-1914, with historians Ned Blackhawk, Ben Kiernan, and Rebe Taylor.

During the 2021-2022 academic year, he will be a Dana and David Dornsife Fellow at the Hutington Library.