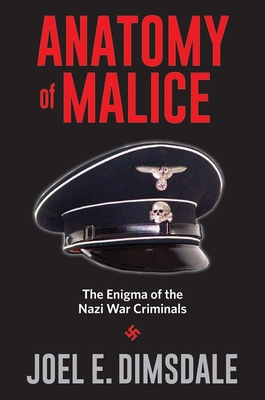 Anatomy of Malice: The Enigma of the Nazi War Criminals

In this gripping and haunting narrative, a renowned psychiatrist sheds new light on the psychology of the war criminals at Nuremberg When the ashes had settled after World War II and the Allies convened an international war crimes trial in Nuremberg, a psychiatrist, Douglas Kelley, and a psychologist, Gustave Gilbert, tried to fathom the psychology of the Nazi leaders, using extensive psychiatric interviews, IQ tests, and Rorschach inkblot tests. Never before or since has there been such a detailed study of governmental leaders who orchestrated mass killings. Before the war crimes trial began, it was self-evident to most people that the Nazi leaders were demonic maniacs. But when the interviews and psychological tests were completed, the answer was no longer so clear. The findings were so disconcerting that portions of the data were hidden away for decades and the research became a topic for vituperative disputes. Gilbert thought that the war criminals' malice stemmed from depraved psychopathology. Kelley viewed them as morally flawed, ordinary men who were creatures of their environment. Who was right? Drawing on his decades of experience as a psychiatrist and the dramatic advances within psychiatry, psychology, and neuroscience since Nuremberg, Joel E. Dimsdale looks anew at the findings and examines in detail four of the war criminals, Robert Ley, Hermann G�ring, Julius Streicher, and Rudolf Hess. Using increasingly precise diagnostic tools, he discovers a remarkably broad spectrum of pathology. Anatomy of Malice takes us on a complex and troubling quest to make sense of the most extreme evil.
Anatomy of Malice: The Enigma of the Nazi War Criminals

JOEL DIMSDALE, MD, is distinguished professor emeritus and research professor in the department of psychiatry. He was born in Sioux City, Iowa and obtained his BA degree in biology from Carleton College.

He then attended Stanford University, where he received both a MA degree in Sociology and an MD degree. He obtained his psychiatric training at Massachusetts General Hospital and then completed a fellowship in psychobiology at the New England Regional Primate Center.

He was on the faculty of Harvard Medical School from 1976 until 1985, when he moved to University of California, San Diego (UCSD).

He has served on numerous editorial boards in psychiatry, psychology, anthropology, medicine, and pharmacology and is Section Editor of UpToDate. He is editor-in-chief emeritus of Psychosomatic Medicine, and is a previous guest editor of Circulation, Drug Therapy, Psychiatric Clinics of North America, J Psychosomatic Research, and International Journal of Hypertension.

He has been a consultant to the President’s Commission on Mental Health, the Institute of Medicine, the National Academy of Sciences and NASA and is a long-time reviewer for NIH. Dr. Dimsdale is the former Chair of the UCSD Academic Senate and is a recipient of the Oliver Johnson Award for distinguished leadership.