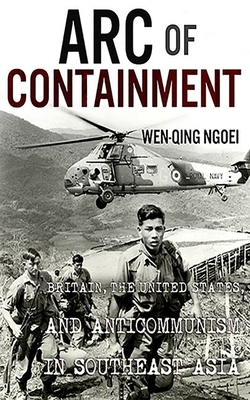 Arc of Containment: Britain, the United States, and Anticommunism in Southeast Asia

Arc of Containment recasts the history of American empire in Southeast and East Asia from World War II through the end of American intervention in Vietnam. Setting aside the classic story of anxiety about falling dominoes, Wen-Qing Ngoei articulates a new regional history premised on strong security and sure containment guaranteed by Anglo-American cooperation.

Ngoei argues that anticommunist nationalism in Southeast Asia intersected with preexisting local antipathy toward China and the Chinese diaspora to usher the region from European-dominated colonialism to US hegemony. Central to this revisionary strategic assessment is the place of British power and the effects of direct neocolonial military might and less overt cultural influences based in decades of colonial rule. Also essential to the analysis in Arc of Containment is the considerable influence of Southeast Asian actors upon Anglo-American imperial strategy throughout the post-war period.

In Arc of Containment Ngoei shows how the pro-US trajectory of Southeast Asia after the Pacific War was, in fact, far more characteristic of the wider region's history than American policy failure in Vietnam. Indeed, by the early 1970s, five key anticommunist nations--Malaya, Singapore, Philippines, Thailand, and Indonesia--had quashed Chinese-influenced socialist movements at home and established, with U.S. support, a geostrategic arc of states that contained the Vietnamese revolution and encircled China. In the process, the Euro-American colonial order of Southeast Asia passed from an era of Anglo-American predominance into a condition of US hegemony. Arc of Containment demonstrates that American failure in Vietnam had less long-term consequences than widely believed because British pro-West nationalism had been firmly entrenched twenty-plus years earlier. In effect, Ngoei argues, the Cold War in Southeast Asia was but one violent chapter in the continuous history of western imperialism in the region in the twentieth century.

Arc of Containment: Britain, the United States, and Anticommunism in Southeast Asia

Dr. Wen-Qing Ngoei is Assistant Professor of Humanities in the School of Social Sciences at the Singapore Management University.

He graduated with a PhD in History from Northwestern University, specializing in U.S. foreign relations with Southeast Asia in the twentieth century. Before joining SMU, he completed postdoctoral stints at Northwestern and Yale University, and was Assistant Professor of History at Nanyang Technological University from 2016 through 2019.

His first book, Arc of Containment: Britain, the United States, and Anticommunism in Southeast Asia (Cornell University Press, 2019) traces how British neocolonial strategies intertwined with Southeast Asian anti-communist nationalism to usher the region from formal colonialism to US hegemony. It has been listed as one of the best and top-selling books on nationalism and colonialism by BookAuthority, featured on CNN and Forbes as the world’s leading site for book recommendations.

His essays have appeared in journals like Diplomatic History, the Journal of American-East Asian Relations (JAER) and International Journal: Canada’s Journal of Global Policy Analysis. His JAER essay on the origins of the domino theory won the 2014 Frank W. Gibney Prize. He has co-authored (with Anne Foster) the introduction to a recent Diplomatic History forum on the history of US-Southeast Asian relations which also carries his essay on U.S. policy and the Chinese diaspora of Southeast Asia. He also has a number of forthcoming essays on Southeast Asian foreign relations, British neocolonialism and the Vietnam War.

He is currently working on a new research project on how Southeast Asia’s culture-makers–novelists, playwrights, poets and artists–shaped the region’s foreign relations from the 1970s through the 1990s.

Perspectives, the magazine of the American Historical Association, interviewed him in August 2017 for its regular Member Spotlight segment.

His research has been supported by fellowships and grants from the Society for Historians of American Foreign Relations (SHAFR), the Nicholas D. Chabraja Center for Historical Studies, the Rajawali EDGS (Equality Development and Globalization Studies) program, the Brady-Johnson Grand Strategy Program in International Security Studies at Yale University, and the Ministry of Education (Singapore) Academic Research Fund.