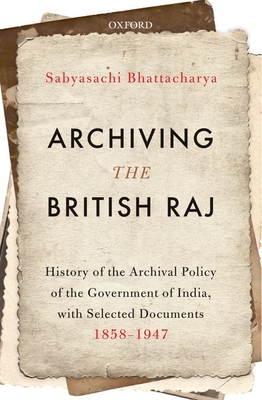 Archiving the British Raj: History of the Archival Policy of the Government of India, with Selected Documents, 1858-1947

Generally the archives are sites where historians conduct research into our past. Seldom are the archives objects of research. Archiving the Raj traces the path that led to creation of a central archive in India. In examining the archival policy of the colonial government, it proceeds to explore the complex relationship between knowledge and power. While a section of British political authorities favoured accurate archiving of historical events and limited access to records for selected non-official researchers, the overwhelming opinion in official circles was against such access. In the last two decades of colonial rule in India there were anticipations of freedom in many areas of the public sphere, and, in many ways, these were felt in the domain of archiving, chiefly in the form of reversal of earlier policies. From this perspective, the author discusses how the World Wars, the decline of Britain, among other factors, effected a transition from a Euro-centric and disparaging approach to India towards a more liberal and less ethnocentric approach.
Archiving the British Raj: History of the Archival Policy of the Government of India, with Selected Documents, 1858-1947

Sabyasachi Bhattacharya (1938-2019), one of the foremost historians of modern India, died in Kolkata on Monday. He was 81 and suffering from cancer of the spinal cord for well over a year.

A prolific writer, he enjoyed a stature similar to historians Romila Thapar, K N Panicker and Sumit Sarkar. He made lasting contribution for his study of the working of the colonial regime and various economic aspects in colonial and post-colonial India.

On Monday historians recalled how, Bhattacharya, suffering from cancer, did not spare himself the rigour of editing a three volume Comprehensive History of Modern Bengal (1700-1950), to be published by Asiatic Society. As many as 65 scholars from India and abroad contributed to this book that has been sent to the press.

Despite illness, he remained intellectually active throughout 2017 and 2018 and his last book, ‘Archiving the British Raj: History of the Archival Policy of the Government of India, with Selected Documents, 1858–1947’, was published in November 2018.

The disciplined approach marked Bhattacharya’s academic journey down the years.

His monumental work, ‘Financial Foundations Of the British Raj: Ideas And Interests In The Reconstruction Of Indian Public Finance (1858-1872)’, which was first published in 1971 and has run into its seventh edition, is considered a classic. ‘The Colonial State: Theory and Practice’ is another of his esteemed books.

Bhattacharya initially earned his repute as a historian with his seminal works on economic history of India under the colonial rule, based on archival research, and later also worked on political and cultural-intellectual history of Independent India.

Historians also valued his journey from the strict confines of the area of specialisation -- economic history -- to providing an all-encompassing view of India, placing it in the context of world history for colonial and post-colonial periods.

Bhattacharya was also reputed as a teacher and administrator. He had served as the vice-chancellor of Visva-Bharati University (1991-1995) and Chairman of the Indian Council of Historical Research (2007-2011), besides teaching history at Jawaharlal Nehru University (1976-2003) (JNU).

He played a pivotal role behind the foundation of Centre for Historical Studies at JNU.

Besides having written more than three dozen books, he was the chief editor of Indian Historical Review and the general editor of Towards Freedom, a series on the movement for Independence in India published by Oxford University Press in collaboration with ICHR.

‘Essays in Modern Indian Economic History’ (2015) and ‘Towards a New History of Work’ (2017), two books he edited during the last phase of his life, continued with the same mission of chronicling the country’s economic history.

He is survived by his wife, Malabika and daughter, Ashidhara Das. His last rites will be performed on Wednesday.