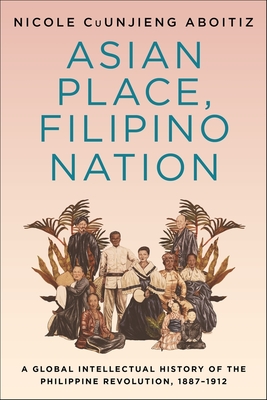 The Philippine Revolution of 1896-1905, which began against Spain and continued against the United States, took place in the context of imperial subjugation and local resistance across Southeast Asia. Yet scholarship on the revolution and the turn of the twentieth century in Asia more broadly has largely approached this pivotal moment in terms of relations with the West, at the expense of understanding the East-East and Global South connections that knit together the region's experience. Asian Place, Filipino Nation reconnects the Philippine Revolution to the histories of Southeast and East Asia through an innovative consideration of its transnational political setting and regional intellectual foundations. Nicole CuUnjieng Aboitiz charts turn-of-the-twentieth-century Filipino thinkers' and revolutionaries' Asianist political organizing and proto-national thought, scrutinizing how their constructions of the place of Asia connected them to their regional neighbors. She details their material and affective engagement with Pan-Asianism, tracing how colonized peoples in the periphery of this imagined Asia--focusing on Filipinos, but with comparison to the Vietnamese--reformulated a political and intellectual project that envisioned anticolonial Asian solidarity with the Asian center of Japan. CuUnjieng Aboitiz argues that the revolutionary First Philippine Republic's harnessing of transnational networks of support, activism, and association represents the crucial first instance of Pan-Asianists lending material aid toward anticolonial revolution against a Western power. Uncovering the Pan-Asianism of the periphery and its critical role in shaping modern Asia, Asian Place, Filipino Nation offers a vital new perspective on the Philippine Revolution's global context and content.
Asian Place, Filipino Nation: A Global Intellectual History of the Philippine Revolution, 1887-1912

Originally from the Philippines, I am a Research Fellow at Clare Hall, Supervisor in World History, and the Executive Director of the Toynbee Prize Foundation. Immediately prior, I was a Postdoctoral Fellow at the Weatherhead Center for International Affairs at Harvard University. I earned my Ph.D. in Southeast Asian and International History at Yale University. My broad research interests center on global intellectual history and Southeast Asian environmental, cultural, and social history. My current research analyses the co-constitution of class and relationships with the natural environment over the 19th to the 20th centuries in the Philippines.

My first book, Asian Place, Filipino Nation: A Global Intellectual History of the Philippine Revolution, 1887-1912, published by Columbia University Press in June 2020, charts the employment of ‘place’ in the proto-national thought and revolutionary organizing of turn-of-the-twentieth-century Filipino thinkers. It analyses how their Pan-Asian political organizing and their constructions of the place of ‘Asia’ and of the spatial registers of race/Malayness connected them to their regional neighbors undertaking the same work.

Asian Place, Filipino Nation unearths precisely what ground the Philippine nation has built itself upon intellectually, excavating its neglected cosmopolitan and transnational Asian and Malay moorings in particular, in order to reconnect modern Philippine history to that of Southeast and East Asia, from which it has been historiographically separated.

Asian Place, Filipino Nation interrogates this period’s Southeast Asian reformulation and practice of Pan-Asianism and Malay Asianism in the face of Western imperial consolidation and the rise of Japan, focusing on the Philippine case but with an eye to the contemporaneous Vietnamese one. It incorporates the “periphery” into our understanding of Pan-Asianism and aims to correct our exclusively intellectual historical and Northeast-Asia-centric understandings of Pan-Asianism.

It shows that the revolutionary First Philippine Republic’s foreign collaboration represents the first instance of fellow Pan-Asianists lending material aid toward anti-colonial revolution against a Western power (rather than overthrow of a domestic dynasty) and harnessing transnational Pan-Asian networks of support, activism, and association toward doing so. This material dimension is crucial to understanding the Pan-Asianism of the colonized “periphery” and to incorporating the periphery into this history. So too is the affective dimension, in which fantasies, imagination, and a certain emotionality formed much of the periphery’s engagement with the model of Meiji-era Japan and Asian solidarity.

Asian Place, Filipino Nation argues for the importance of both dimensions as lenses through which the Pan-Asianism of the periphery can be recognized and made legible to the workings of the “centre.”