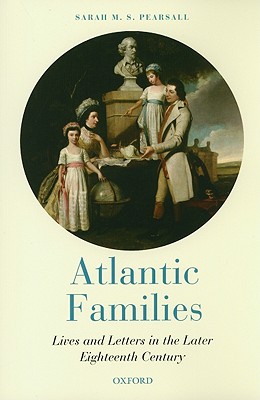 Atlantic Families: Lives and Letters in the Later Eighteenth Century

The Atlantic represented a world of opportunity in the eighteenth century, but it represented division also, separating families across its coasts. Whether due to economic shifts, changing political landscapes, imperial ambitions, or even simply personal tragedy, many families found themselves fractured and disoriented by the growth and later fissure of a larger Atlantic world. Such dislocation posed considerable challenges to all individuals who viewed orderly family relations as both a general and a personal ideal.

The more fortunate individuals who thus found themselves all at sea were able to use family letters, with attendant emphases on familiarity, sensibility, and credit, in order to remain connected in times and places of considerable disconnection. Portraying the family as a unified, affectionate, and happy entity in such letters provided a means of surmounting concerns about societies fractured by physical distance, global wars, and increasing social stratification. It could also provide social and economic leverage to individual men and women in certain circumstances.

Sarah Pearsall explores the lives and letters of these families, revealing the sometimes shocking stories of those divided by sea. Ranging across the Anglophone Atlantic, including mainland American colonies and states, Britain, and the British Caribbean, Pearsall argues that it was this expanding Atlantic world-much more than the American Revolution-that reshaped contemporary ideals about families, as much as families themselves reshaped the transatlantic world.

Atlantic Families: Lives and Letters in the Later Eighteenth Century