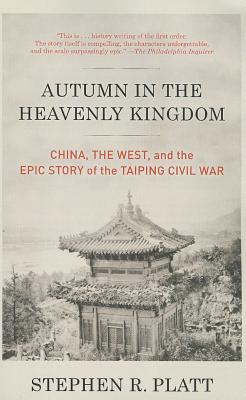 Autumn in the Heavenly Kingdom: China, the West, and the Epic Story of the Taiping Civil War

Winner of the 2012 Cundill Prize in History

A gripping account of China's nineteenth-century Taiping Rebellion, one of the largest civil wars in history. Autumn in the Heavenly Kingdom brims with unforgettable characters and vivid re-creations of massive and often gruesome battles--a sweeping yet intimate portrait of the conflict that shaped the fate of modern China.

The story begins in the early 1850s, the waning years of the Qing dynasty, when word spread of a major revolution brewing in the provinces, led by a failed civil servant who claimed to be the son of God and brother of Jesus. The Taiping rebels drew their power from the poor and the disenfranchised, unleashing the ethnic rage of millions of Chinese against their Manchu rulers. This homegrown movement seemed all but unstoppable until Britain and the United States stepped in and threw their support behind the Manchus: after years of massive carnage, all opposition to Qing rule was effectively snuffed out for generations. Stephen R. Platt recounts these events in spellbinding detail, building his story on two fascinating characters with opposing visions for China's future: the conservative Confucian scholar Zeng Guofan, an accidental general who emerged as the most influential military strategist in China's modern history; and Hong Rengan, a brilliant Taiping leader whose grand vision of building a modern, industrial, and pro-Western Chinese state ended in tragic failure.

This is an essential and enthralling history of the rise and fall of the movement that, a century and a half ago, might have launched China on an entirely different path into the modern world.

Autumn in the Heavenly Kingdom: China, the West, and the Epic Story of the Taiping Civil War

Stephen R. Platt is a historian of modern China, specializing in the nineteenth century and China's foreign relations. He holds a PhD in Chinese history from Yale University (2004), where his dissertation won the university-wide Theron Rockwell Field Prize. He teaches courses on modern Chinese history from the 17th century to the present day, as well as seminars on US-China relations, comparative nationalism, and the writing of history.

He will be on leave in 2019 with support from an NEH Public Scholar fellowship.

Professor Platt’s most recent book is Imperial Twilight: The Opium War and the End of China's Last Golden Age (Knopf, 2018), a history of the long-term origins of the Opium War. Imperial Twilight was a New York Times Book Review editors’ choice and was shortlisted for the Baillie Gifford Prize.

The Sunday Times and Financial Times both listed it as one of the best history books of 2018. His previous book, Autumn in the Heavenly Kingdom (Knopf, 2012), was a military history of the Taiping Rebellion in global context that won the Cundill History Prize, the largest international prize for a work of history.

Autumn in the Heavenly Kingdom was also a Washington Post notable book of 2012, a New York Times Book Review editors’ choice, and a finalist for the Massachusetts Book Award. Platt is also the author of Provincial Patriots: The Hunanese and Modern China  (Harvard University Press, 2007).

His writing has appeared in the New York Times, Chinafile, the Atlantic online, the Wall Street Journal, and Late Imperial China, among other venues.