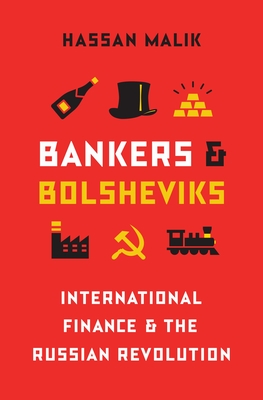 Bankers and Bolsheviks: International Finance and the Russian Revolution

Following an unprecedented economic boom fed by foreign investment, the Russian Revolution triggered the largest sovereign default in history. In Bankers and Bolsheviks, Hassan Malik tells the story of this boom and bust, chronicling the experiences of leading financiers of the day as they navigated one of the most lucrative yet challenging markets of the first modern age of globalization. He reveals how a complex web of factors--from government interventions to competitive dynamics and cultural influences--drove a large inflow of capital during this tumultuous period. This gripping book demonstrates how the realms of finance and politics--of bankers and Bolsheviks--grew increasingly intertwined, and how investing in Russia became a political act with unforeseen repercussions.

Bankers and Bolsheviks: International Finance and the Russian Revolution

Hassan Malik is an emerging markets and global macro hedge fund analyst with a background in equity research and academic training in financial history. His book, Bankers and Bolsheviks: International Finance and the Russian Revolution, 1892-1922, was published by Princeton University Press in November 2018.

Hassan’s book explores the story of one of the largest booms and busts in international financial history – one that saw Russia become the largest net international debtor in the world by 1914, and one that ended with the largest default in history in 1918. In contrast to earlier work in the social sciences that relies heavily on quantitative data, the book examines the drivers of the boom and bust from the perspective of the financial intermediaries that facilitated the export of capital from major Western financial centers into the Russian market, drawing on both quantitative historical financial data and on archival sources. The book is also multifaceted in that it draws on Russian-language sources to explore the Russian side to a story frequently told through Western sources.

Prior to graduate school, Hassan worked for several years in investment banking in for J.P. Morgan and Troika Dialog in New York and Moscow after graduating from the University of Chicago. He later covered emerging markets for macroeconomic research boutique, Greenmantle LLC, before heading Emerging Markets and Europe equity and currency strategy at the Ned Davis Research Group. He has more recently worked as a macroeconomic consultant to hedge funds in the U.S. and Europe, with a particular focus on emerging markets.

Hassan has lived in Saudi Arabia, Mexico, Venezuela, Malaysia, Russia, France, Italy, the United Kingdom, and the United States. He is fluent in Russian, Spanish, and Urdu/Hindi, proficient in French, and speaks basic Italian.