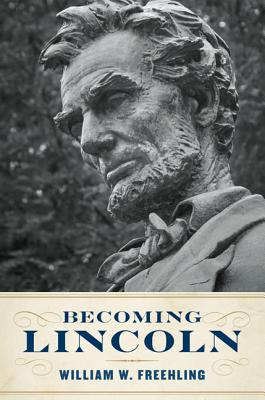 Shortlisted for the 2018 Lincoln Prize

Previous biographies of Abraham Lincoln--universally acknowledged as one of America's greatest presidents--have typically focused on his experiences in the White House. In Becoming Lincoln, renowned historian William Freehling instead emphasizes the prewar years, revealing how Lincoln came to be the extraordinary leader who would guide the nation through its most bitter chapter.

Freehling's engaging narrative focuses anew on Lincoln's journey. The epic highlights Lincoln's difficult family life, first with his father and later with his wife. We learn about the staggering number of setbacks and recoveries Lincoln experienced. We witness Lincoln's famous embodiment of the self-made man (although he sought and received critical help from others).

The book traces Lincoln from his tough childhood through incarnations as a bankrupt with few prospects, a superb lawyer, a canny two-party politician, a great orator, a failed state legislator, and a losing senatorial candidate, to a winning presidential contender and a besieged six weeks as a pre-war president.

As Lincoln's individual life unfolds, so does the American nineteenth century. Few great Americans have endured such pain but been rewarded with such success. Few lives have seen so much color and drama. Few mirror so uncannily the great themes of their own society. No one so well illustrates the emergence of our national economy and the causes of the Civil War.

The book concludes with a substantial epilogue in which Freehling turns to Lincoln's wartime presidency to assess how the preceding fifty-one years of experience shaped the Great Emancipator's final four years. Extensively illustrated, nuanced but swiftly paced, and full of examples that vividly bring Lincoln to life for the modern reader, this new biography shows how an ordinary young man from the Midwest prepared to become, against almost absurd odds, our most tested and successful president.

Now retired from a university career that brought him as many honors for teaching as for books, Mr. Freehling currently writes full time at the Virginia Foundation for the Humanities as a permanent Senior Fellow.   His latest publication is Showdown in Virginia: The 1861 Convention and the Fate of the Union (2010). His current projects include a sesquicentennial book of essays on the cause of the American Civil War and a biography of Abraham Lincoln.

In 2007, the Oxford University Press published the second and concluding volume of Professor William W. Freehling’s Road to Disunion, subtitled Secessionists Triumphant, 1854-1861 (a main selection of the History Book Club, a Washington Post Notable Book of the year, a New York Times Sunday Book Review Editor’s Choice, and winner of the Hodges Prize).

The first volume of Road to Disunion, subtitled Secessionists at Bay, 1776-1854 and published in 1990, was also a History Book Club main selection and was winner of the Owsley Prize. Together with The South versus the South: How Southern Anti-Confederates Shaped the Course of the Civil War (appearing in 2002 and winner of the Jefferson Davis Prize), The Road to Disunion reinterprets the causes of the Civil War and of Confederate defeat.

These books, researched on a Guggenheim Foundation fellowship, bring to climax a lifetime’s work on the Old South, begun forty years ago with the publication of Prelude to Civil War; The Nullification Controversy in South Carolina (winner of the Nevins and Bancroft Prizes).