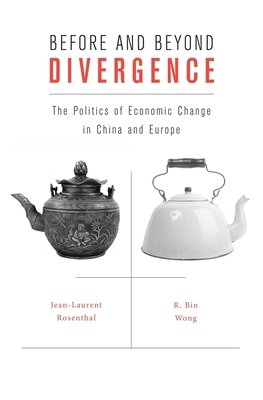 Before and Beyond Divergence: The Politics of Economic Change in China and Europe

China has reemerged as a powerhouse in the global economy, reviving a classic question in economic history: why did sustained economic growth arise in Europe rather than in China?

Many favor cultural and environmental explanations of the nineteenth-century economic divergence between Europe and the rest of the world. This book, the product of over twenty years of research, takes a sharply different tack. It argues that political differences which crystallized well before 1800 were responsible both for China's early and more recent prosperity and for Europe's difficulties after the fall of the Roman Empire and during early industrialization.

Rosenthal and Wong show that relative prices matter to how economies evolve; institutions can have a large effect on relative prices; and the spatial scale of polities can affect the choices of institutions in the long run. Their historical perspective on institutional change has surprising implications for understanding modern transformations in China and Europe and for future expectations. It also yields insights in comparative economic history, essential to any larger social science account of modern world history.

Before and Beyond Divergence: The Politics of Economic Change in China and Europe

Jean-Laurent Rosenthal is trying to understand what institutions encourage long-term economic growth and wealth formation. He studies the organization of credit markets and the evolution of inequality and its consequences for welfare.

He has investigated changes in property rights during the French Revolution and the law and organization of enterprises in France, Germany, the United States, and the United Kingdom.

Specifically, he has analyzed credit markets in France between 1660 and 1900 with Philip T. Hoffman of Caltech and Gilles Postel-Vinay, tracking the growth of mortgage markets over two centuries first in Paris and later throughout France. They are also working on a large-scale data project to document the evolution of wealth distribution in Paris from 1800 to the present, having collected data on 600,000 Parisians.

Rosenthal is working with Timothy Guinnane, Ron Harris, and Naomi Lamoreaux to evaluate how law and enterprises co-evolved in Britain, France, Germany, and the United States, focusing on how entrepreneurs might have structured their firms to mitigate the costs of untimely dissolution or minority oppression. Rosenthal is also interested in determining why inequality in life expectancy in Paris and France declined much faster than wealth inequality in the six decades after the 1860s.

Rosenthal has written six books and numerous articles and reviews. His book Priceless Markets: The Political Economy of Credit in Paris, 1660–1870, coauthored with Philip Hoffman and Gilles Postel-Vinay, received the Gyorgy Ranki Biennial Prize from the Economic History Association in 2001.

His dissertation, which focused on why infrastructure investment was difficult under the old regime in France but was relatively easy after 1815, received the Alexander Gerschenkron Prize from the Economic History Association in 1989 and the Milton and Francis Clauser Doctoral Prize from Caltech in 1988. Rosenthal was awarded the Arthur H. Cole Prize for best article in the Journal of Economic History in 1991.

He received a John Simon Guggenheim Memorial Foundation Fellowship (2001–2002), a Center for Advanced Study in the Behavioral Sciences Fellowship (1993–1994), a National Science Foundation Young Investigator Award (1992), and an Alfred P. Sloan Doctoral Dissertation Fellowship (1987–1988). He is the co-editor of the Journal of Economic History and serves on the editorial boards of several other journals.