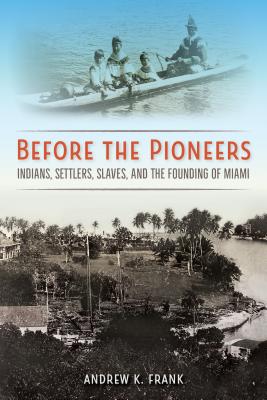 Before the Pioneers: Indians, Settlers, Slaves, and the Founding of Miami

Formed seemingly out of steel, glass, and concrete, with millions of residents from around the globe, Miami has ancient roots that can be hard to imagine today. Before the Pioneers takes readers back through forgotten eras to the stories of the people who shaped the land along the Miami River long before most modern histories of the city begin.

Andrew Frank begins the chronicle of the Magic City's long history 4,000 years ago when Tequesta Indians settled at the mouth of the river, erecting burial mounds, ceremonial centers, and villages. They created a network of constructed and natural waterways through the Everglades and trade routes to the distant Calusa on the west coast. Centuries later, the area became a stopover for Spanish colonists on their way to Havana, a haven where they could shelter from storms and obtain freshwater, lumber, and other supplies. Frank brings to life the vibrant colonies of fugitives and seafarers that formed on the shores of Biscayne Bay in the eighteenth century. He tells of the emergence of the tropical fruit plantations and the accompanying enslaved communities, as well as the military occupation during the Seminole Wars. Eventually, the small seaport town flourished with the coming of pioneers like Julia Tuttle and Henry Flagler who promoted the city as a place of luxury and brought new waves of residents from the North.

Frank pieces together the material culture and the historical record of the Miami River to re-create the fascinating past of one of the world's most influential cities.

Before the Pioneers: Indians, Settlers, Slaves, and the Founding of Miami