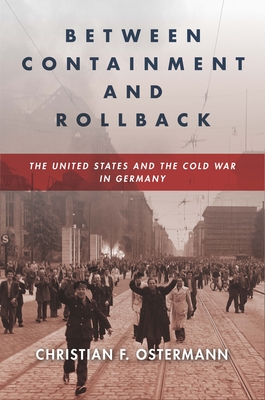 Between Containment and Rollback: The United States and the Cold War in Germany

In the aftermath of World War II, American policymakers turned to the task of rebuilding Europe while keeping communism at bay. In Germany, formally divided since 1949, the United States prioritized the political, economic, and, eventually, military integration of the fledgling Federal Republic with the West. The extraordinary success story of forging this alliance has dominated our historical under-standing of the American-German relationship. Largely left out of the grand narrative of U.S.-German relations were most East Germans who found themselves caught under Soviet and then communist control by the post-1945 geo-political fallout of the war that Nazi Germany had launched. They were the ones who most dearly paid the price for the country's division. This book writes the East Germans--both leadership and general populace--back into that history as objects of American policy and as historical agents in their own right

Based on recently declassified documents from American, Russian, and German archives, this book demonstrates that U.S. efforts from1945 to 1953 went beyond building a prosperous democracy in western Germany and containing Soviet-Communist power to the east. Under the Truman and then the Eisenhower administrations, American policy also included efforts to undermine and roll back Soviet and German communist control in the eastern part of the country. This story sheds light on a dark-er side to the American Cold War in Germany: propaganda, covert operations, economic pressure, and psychological warfare. Christian F. Ostermann takes an international history approach, capturing Soviet and East German responses and actions, and drawing a rich and complex picture of the early East-West confrontation in the heart of Europe.

Between Containment and Rollback: The United States and the Cold War in Germany

Dr. Ostermann also envisioned and founded the Center’s Global Europe Program (2007-2017) and chaired the Ion Ratiu Democracy Award (2006-2017), which seeks to recognize and strengthen the efforts of engaged thinkers and thoughtful practitioners working on behalf of democracy.

A historian of contemporary US foreign policy and Germany, Ostermann is the author of numerous articles and document editions. His 1996 article on the 1953 East German Uprising won the German Studies Association’s Best Article Prize, his Uprising in East Germany 1953: The Cold War, The German Question, and the First Major Upheaval Behind the Iron Curtain (2001) won an Honorable Mention of the Kuehl Prize for Documentary Editing by the Society of Historians of American Foreign Relations.

His book Between Containment and Rollback: he United States and the Cold War in Germany, 1945-1953 will be published by Stanford University Press in 2019. He is currently completing a biography of East German chief of foreign intelligence Markus Wolf, the longest-serving spymaster of the Cold War.

A reappraisal, a special issue of the Journal of Strategic Studies 39 (2016), ed. with Leopoldo Nuti; Sino-European Relations during the Cold War and the Rise of a Multipolar World: A Critical Oral History, ed. with Enrico Fardella and Charles Kraus (Washington, 2015); Moles, Defectors, and Deceptions: James Angleton and His Influence on US Counterintelligence,” ed. with Bruce Hoffman (Washington, D.C.: 2014); The Rise and Fall of Détente on the Korean Peninsula, 1970-1974 (2011), ed. with James Person; Crisis and Confrontation on the Korean Peninsula: 1968-1969 (2010), ed. with James Person; Connecting Histories: Decolonization and the Cold War in Southeast Asia, 1945-1962 (2009), ed. with Christopher Goscha.

In 2018 Ostermann was a Berlin Prize Fellow at the American Academy in Berlin. Fellowships include a Senior Research Fellowship at the Norwegian Nobel Institute in Oslo, the Harry S. Truman Library Dissertation Fellowship and SHAFR’s W. Stull Holt Fellowship. He worked as a research fellow at The George Washington University’s National Security Archive, with which he remains affiliated as a Senior Research Fellow. He has taught at Georgetown University and George Washington University and studied in Germany and the United States.