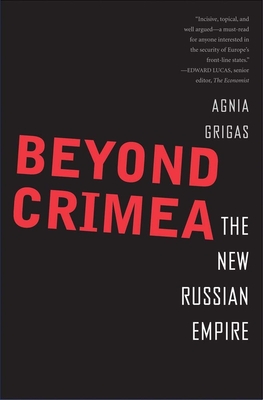 Beyond Crimea: The New Russian Empire

How will Russia redraw post-Soviet borders? In the wake of recent Russian expansionism, political risk expert Agnia Grigas illustrates how--for more than two decades--Moscow has consistently used its compatriots in bordering nations for its territorial ambitions. Demonstrating how this policy has been implemented in Ukraine and Georgia, Grigas provides cutting-edge analysis of the nature of Vladimir Putin's foreign policy and compatriot protection to warn that Moldova, Kazakhstan, the Baltic States, and others are also at risk.
Beyond Crimea: The New Russian Empire

Dr. Agnia Grigas is a nonresident senior fellow at the Atlantic Council working on energy and geopolitical economy. She is the author of three acclaimed books: “The New Geopolitics of Natural Gas” (Harvard University Press, 2017), “Beyond Crimea: The New Russian Empire” (Yale University Press, 2016) and “The Politics of Energy and Memory between the Baltic States and Russia” (Routlege 2013, 2016).

She is also an associate with the Argonne National Laboratories, and an advisory board member for educational institutions and energy companies such as the McKinnon Center for Global Affairs at Occidental College, the Vilnius Institute for Policy Analysis, LITGAS, and others. She has testified for the Senate Committee on Energy and Natural Resources on American LNG exports to Europe.

Agnia has fifteen years of experience in business development and strategic advisory for multinational corporations and US government institutions on growth opportunities and political risks to execute global business development goals. Previously she was an energy and FDI advisor to the Lithuanian Ministry of Foreign Affairs. She started her career as a financial analyst at JPMorgan and subsequently advised on emerging markets for Eurasia Group, Barclays Bank, and other Fortune 100 companies.

Agnia holds a master’s and doctorate in International Relations from the University of Oxford and a bachelor of arts in Economics and Political Science from Columbia University.