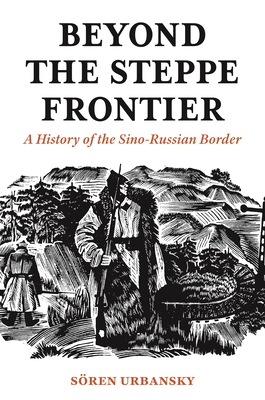 Beyond the Steppe Frontier: A History of the Sino-Russian Border

A comprehensive history of the Sino-Russian border, one of the longest and most important land borders in the world

The Sino-Russian border, once the world's longest land border, has received scant attention in histories about the margins of empires. Beyond the Steppe Frontier rectifies this by exploring the demarcation's remarkable transformation--from a vaguely marked frontier in the seventeenth century to its twentieth-century incarnation as a tightly patrolled barrier girded by watchtowers, barbed wire, and border guards. Through the perspectives of locals, including railroad employees, herdsmen, and smugglers from both sides, S�ren Urbansky explores the daily life of communities and their entanglements with transnational and global flows of people, commodities, and ideas. Urbansky challenges top-down interpretations by stressing the significance of the local population in supporting, and undermining, border making.

Because Russian, Chinese, and native worlds are intricately interwoven, national separations largely remained invisible at the border between the two largest Eurasian empires. This overlapping and mingling came to an end only when the border gained geopolitical significance during the twentieth century. Relying on a wealth of sources culled from little-known archives from across Eurasia, Urbansky demonstrates how states succeeded in suppressing traditional borderland cultures by cutting kin, cultural, economic, and religious connections across the state perimeter, through laws, physical force, deportation, reeducation, forced assimilation, and propaganda.

Beyond the Steppe Frontier sheds critical new light on a pivotal geographical periphery and expands our understanding of how borders are determined.

Beyond the Steppe Frontier: A History of the Sino-Russian Border

Sören Urbansky is a historian of Russia and China in the modern era, specializing in imperial and racial entanglements, emigration and the history of borders. He is a research fellow at the German Historical Institute (GHI) in Washington, D.C., and since 2021 heading its Pacific Regional Office at UC Berkeley.

Before he joined the GHI in 2018, he has taught Chinese and Russian history at the Universities of Munich and Freiburg and was a postdoctoral fellow at the University of Cambridge.

He is the author of following books.

Sören is currently embarking on a new project that examines anti-Chinese sentiments in a global perspective.