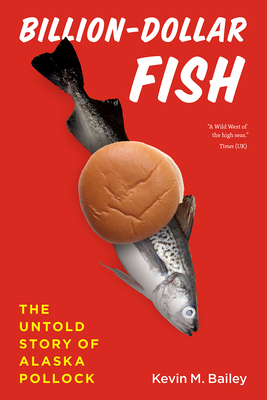 Alaska pollock is everywhere. If you're eating fish but you don't know what kind it is, it's almost certainly pollock. Prized for its generic fish taste, pollock masquerades as crab meat in california rolls and seafood salads, and it feeds millions as fish sticks in school cafeterias and Filet-O-Fish sandwiches at McDonald's. That ubiquity has made pollock the most lucrative fish harvest in America--the fishery in the United States alone has an annual value of over one billion dollars. But even as the money rolls in, pollock is in trouble: in the last few years, the pollock population has declined by more than half, and some scientists are predicting the fishery's eventual collapse.

In Billion-Dollar Fish, Kevin M. Bailey combines his years of firsthand pollock research with a remarkable talent for storytelling to offer the first natural history of Alaska pollock. Crucial to understanding the pollock fishery, he shows, is recognizing what aspects of its natural history make pollock so very desirable to fish, while at the same time making it resilient, yet highly vulnerable to overfishing. Bailey delves into the science, politics, and economics surrounding Alaska pollock in the Bering Sea, detailing the development of the fishery, the various political machinations that have led to its current management, and, perhaps most important, its impending demise. He approaches his subject from multiple angles, bringing in the perspectives of fishermen, politicians, environmentalists, and biologists, and drawing on revealing interviews with players who range from Greenpeace activists to fishing industry lawyers.

Seamlessly weaving the biology and ecology of pollock with the history and politics of the fishery, as well as Bailey's own often raucous tales about life at sea, Billion-Dollar Fish is a book for every person interested in the troubled relationship between fish and humans, from the depths of the sea to the dinner plate.

Kevin McLean Bailey started his career as a marine fisheries biologist and ecologist in 1974 after graduating from the University of California at Santa Barbara. His first assignment was on a Japanese crab fishing ship in the eastern Bering Sea for 4 months taking biological measurements on the catch, and then on a pollock factory trawler in the Bering Sea. He later earned his PhD from the University of Washington.

He attained a Senior Scientist level at the Alaska Fisheries Science Center, where he published over 100 papers in peer-reviewed journals and books. He is an Affiliate Professor at the University of Washington and in 2008 was awarded the Sette Award for outstanding lifetime achievement in marine fisheries by the American Fisheries Society.

He left NOAA in 2013 to write full time. His wife is an oceanographer at the Polar Science Center at the University of Washington and Institute for Systems Biology and they have two grown, happy and successful boys and two delightful grandchildren.