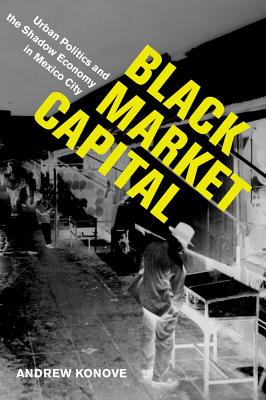 In this extraordinary new book, Andrew Konove traces the history of illicit commerce in Mexico City from the seventeenth century to the twentieth, showing how it became central to the economic and political life of the city. The story centers on the untold history of the Baratillo, the city's infamous thieves' market. Originating in the colonial-era Plaza Mayor, the Baratillo moved to the neighborhood of Tepito in the early twentieth century, where it grew into one of the world's largest emporiums for black-market goods. Konove uncovers the far-reaching ties between vendors in the Baratillo and political and mercantile elites in Mexico City, revealing the surprising clout of vendors who trafficked in the shadow economy and the diverse individuals who benefited from their trade.
Black Market Capital: Urban Politics and the Shadow Economy in Mexico City

His research focuses on the political, economic, and social history of urban Mexico and Spanish America in the late colonial and early national periods. His first book, Black Market Capital: Urban Politics and the Shadow Economy of Mexico City (University of California Press, 2018), traces the history of Mexico City’s infamous Baratillo marketplace from the seventeenth century to the present day, revealing the centrality of extralegal commerce to the city’s local economy and politics.

It received the Social Science Book Prize from the Mexico Section of the Latin American Studies Association and was a finalist for the Business History Conference’s Hagley Prize. Dr. Konove is currently at work on two new projects: a history of money and monetary ideas in Mexico and Spanish America between 1750 and 1850, titled Making Change: Money, Wealth, and Sovereignty in Hispanic America, 1750-1850; and a history of Mexico City’s main public square—tentatively titled Zócalo: A History of Mexico City.

He has published his research in the Journal of Urban History and The Americas. His writing has also appeared in the San Antonio Express-News and the foreign policy journal The National Interest. At UTSA, Dr. Konove teaches graduate and undergraduate courses on colonial and modern Latin American history and the history of the Spanish Empire.

Source: The University of Texas at San Antonio Department of History