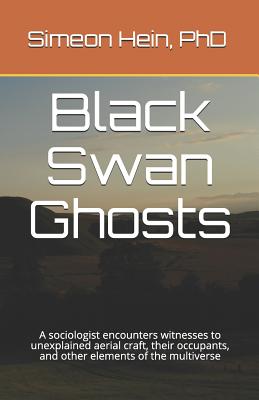 Black Swan Ghosts: A sociologist encounters witnesses to unexplained aerial craft, their occupants, and other elements of the multiverse

An Amazon #1 New Release! What happens when you come into contact with a phenomenon so controversial it can destroy your career? New bonus feature-Stunning witness video interviews from the book now online: links and info provided in the book text. Black Swan Ghosts is an investigation into how our society treats witnesses to unexplained events, unidentified aerial objects, and mysterious beings. It's a topic that I once dismissed as being weird, fringe, and kind of crazy. Something I'd avoid. But after getting involved in the subject of Remote Viewing and getting to know participants in this previously classified government program, I began to encounter more and more highly credible witnesses to these hard-to-explain phenomena. And after a while, the weight of the evidence overcame any doubts I had about the authenticity and veridicality of these subjects. This is an investigation of why our society is so reluctant to engage and address the critical issues raised by such phenomena. Why are we afraid to take the subject seriously? What are the consequences to the witnesses? Exactly what kind of universe do we live in? Includes witness stories from a former Air Force and commercial pilot, children of high ranking Air Force officials, an Aerospace engineer, a former NASA astrobiologist, a retired U.S. government remote viewer, and many others. You'll hear and see what it's like to come face to face with the unknown. It's now time for their stories to be heard. And it's time we all started listening. Now includes video interviews, on the BlackSwanGhosts.com website, with many of the witnesses in the book. Includes witness accounts of: ▪ a hostile encounter between U.S. Air Force jets and an anomalous object over Lake Superior in the 1960's ▪ B-52's during Cold War get scanned by mysterious objects from space near Soviet border ▪ former government remote viewer recounts contact with an alien control panel and interview by intelligence agents ▪ campers on Silbury Hill, UK witness strange luminous objects hovering with a secondary sighting by supporting witness ▪ NASA astrobiologist shows evidence of meteoric extraterrestrial fossils, suppressed Skylab UFO photos, and first-hand account of accidental near-launch of Soviet nuclear missiles caused by huge unidentified disc ▪ woman and friend have car stall and experience missing time near Mt. St. Helens ▪ man and friend see flying disc and its occupant land at night and then get mysterious phone calls ▪ and much, much more!
Black Swan Ghosts: A sociologist encounters witnesses to unexplained aerial craft, their occupants, and other elements of the multiverse