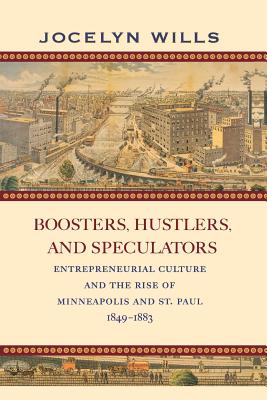 Boosters, Hustlers, and Speculators: Entrepreneurial Culture and the Rise of Minneapolis and St. Paul, 1849-1883

In 1849, when settlers arrived in the newly formed Minnesota Territory, they disembarked at the rough shantytown known as St. Paul, home to fur traders and a handful of merchants. Nearby was Fort Snelling, its soldiers charged with keeping peace in the wilderness, its territory later transferred to the burgeoning settlement at Minneapolis. Less than four decades later, St. Paul had emerged as a mercantile, banking, and railroading center, and Minneapolis had matured into the world's largest flour-milling center. The story of how this came to be involves assorted visionaries, savvy entrepreneurs, and government-supported expansion that combined to make St. Paul-Minneapolis the region's undisputed business, political, and educational center.

Historian Jocelyn Wills offers a business and entrepreneurial study of the Twin Cities during its early years, with particular focus on the individuals who took chances on and promoted the Cities' development. Boosters, Hustlers, and Speculators shares the successes and failures of a host of colorful characters who saw in the Twin Cities opportunities for financial gain and regional fame: early fur trader Norman Kittson, who built a lucrative trading network reaching to the Red River Valley; speculator Franklin Steele, who over-reached at the Falls of St. Anthony and was virtually bankrupt after the panic of 1857; milling visionary William D. Washburn, whose confident investments catapulted Minneapolis's milling district to international renown; railroad magnate James J. Hill, whose calculated business decisions helped him realize his dream of building a rail line to the Pacific. Most arrived with limited means, and only some managed to realize their dreams, but all contributed to the development of Minneapolis and St. Paul as the region's leading manufacturing, banking, and transportation center. This exhaustively researched book provides a firm foundation for understanding the role the Twin Cities have played in the development of the region and the nation from their earliest days.
Boosters, Hustlers, and Speculators: Entrepreneurial Culture and the Rise of Minneapolis and St. Paul, 1849-1883

A Tow Professor of History and Director of American Studies, Jocelyn Wills zig-zagged her way to New York from Vancouver, British Columbia, via Texas, Minnesota, and the many dotted roads that connect the contiguous United States with Canada and Mexico.

Along the way, she encountered both dazzling diversity and disturbing disparities. These realities inform all of her research and teaching interests.

Her most recent book, Tug of War: Surveillance Capitalism, Military Contracting, and the Rise of the Security State (2017), lifts the veil on a corporate world girded by powerful forces at the nexus of state, capital, and geopolitical power games, revealing the ways in which the neoliberal project turned satellites into a multi-billion-dollar commodity and outer space into a competitive, militarized zone.

Her current research/book projects focus on American boom-and-bust and the everyday experiences of workers, consumers, and small-business operators in post-Civil War Brooklyn.