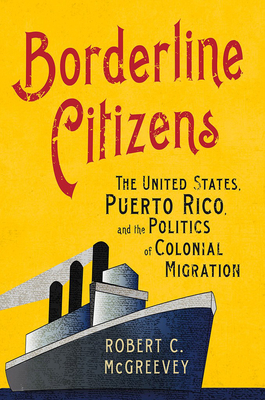 Borderline Citizens: The United States, Puerto Rico, and the Politics of Colonial Migration

Borderline Citizens explores the intersection of U.S. colonial power and Puerto Rican migration. Robert C. McGreevey examines a series of confrontations in the early decades of the twentieth century between colonial migrants seeking work and citizenship in the metropole and various groups--employers, colonial officials, court officers, and labor leaders--policing the borders of the U.S. economy and polity. Borderline Citizens deftly shows the dynamic and contested meaning of American citizenship.

At a time when colonial officials sought to limit citizenship through the definition of Puerto Rico as a U.S. territory, Puerto Ricans tested the boundaries of colonial law when they migrated to California, Arizona, New York, and other states on the mainland. The conflicts and legal challenges created when Puerto Ricans migrated to the U.S. mainland thus serve, McGreevey argues, as essential, if overlooked, evidence crucial to understanding U.S. empire and citizenship.

McGreevey demonstrates the value of an imperial approach to the history of migration. Drawing attention to the legal claims migrants made on the mainland, he highlights the agency of Puerto Rican migrants and the efficacy of their efforts to find an economic, political, and legal home in the United States. At the same time, Borderline Citizens demonstrates how colonial institutions shaped migration streams through a series of changing colonial legal categories that tracked alongside corporate and government demands for labor mobility. McGreevey describes a history shaped as much by the force of U.S. power overseas as by the claims of colonial migrants within the United States.

Borderline Citizens: The United States, Puerto Rico, and the Politics of Colonial Migration

Robert McGreevey holds a BA in history from Swarthmore College and an MA and PhD from Brandeis University. A specialist in the political, social, and cultural history of the United States from 1877-1945, he teaches courses on the Gilded Age and Progressive Era, America in the Twentieth Century and the history of the U.S. in the World.

His research focuses on the intersection of foreign policy and migration in the twentieth century and has been supported by the Society for Historians of American Foreign Relations, the Immigration and Ethnic History Society, and the Organization of American Historians. His first book, Borderline Citizens: The United States, Puerto Rico, and the Politics of Colonial Migration was published by Cornell University Press in 2018.

Source: The College of New Jersey