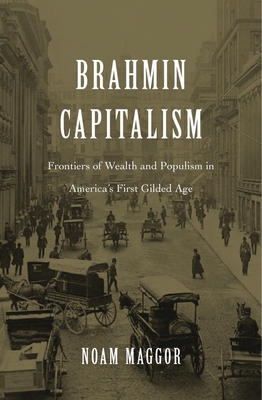 Tracking the movement of finance capital toward far-flung investment frontiers, Noam Maggor reconceives the emergence of modern capitalism in the United States. Brahmin Capitalism reveals the decisive role of established wealth in the transformation of the American economy in the decades after the Civil War, leading the way to the nationally integrated corporate capitalism of the twentieth century.

Maggor's provocative history of the Gilded Age explores how the moneyed elite in Boston--the quintessential East Coast establishment--leveraged their wealth to forge transcontinental networks of commodities, labor, and transportation. With the decline of cotton-based textile manufacturing in New England and the abolition of slavery, these gentleman bankers traveled far and wide in search of new business opportunities and found them in the mines, railroads, and industries of the Great West. Their investments spawned new political and social conflict, in both the urbanizing East and the expanding West. In contests that had lasting implications for wealth, government, and inequality, financial power collided with more democratic visions of economic progress.

Rather than being driven inexorably by technologies like the railroad and telegraph, the new capitalist geography was a grand and highly contentious undertaking, Maggor shows, one that proved pivotal for the rise of the United States as the world's leading industrial nation.

I joined Queen Mary in 2017. Prior to this I taught at Cornell University and Vanderbilt University. I also held fellowships at the Charles Warren Center at Harvard University and the School of Historical Studies at Tel Aviv University.

I am a historian of the United States in the nineteenth and twentieth centuries, with a particular emphasis on the emergence of industrial capitalism. My book Brahmin Capitalism: Frontiers of Wealth and Populism in America's First Gilded Age, is a finance-driven and urban-centered account of the transformation of American capitalism at the end of the nineteenth century.

It explores how the United States shifted from its former position in the world economy as an exporter of agricultural commodities – cotton, above all – to an industrial nation and imperial power on the world stage. In particular, the book analyzes the creation of an interconnected national market, which has long been viewed as immutable and technologically-driven, as a contentious and highly malleable political project. It more generally examines economic change as politically constituted and deeply ideological, transcending conceptual divides between economics, politics, culture, and society.

My new project, tentatively entitled "The United States as a Developing Nation" interrogates the integration of vast territories of what became the American West into the economic orbit of the United States. With renewed attention to the core concerns of political economy, it aims to position the Western U.S. comparatively alongside other global peripheries – in Russia, Egypt, India, and Latin America – that were aggressively pulled in this period into the world economy.