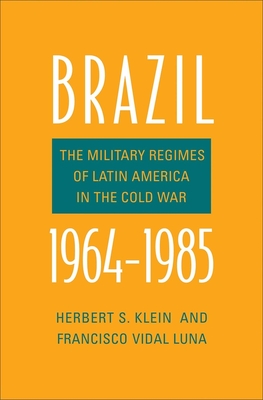 An insightful study of the political, economic, and social changes Brazil experienced during the twenty-year rule of its Cold War military regime.

Cuba's revolution in 1959 fueled powerful anti-Communist fears in the United States. As a result, in the years that followed, governments throughout Central and South America were toppled in U.S.-backed military coups, and by 1977 only three democratically elected leaders remained in all of Latin America. This perceptive study, coauthored by a revered historian and a prominent economist, examines how the military rulers of Brazil profoundly altered the nation's economy, politics, and society during their two decades in power, and it explores the lasting impact of these changes after democracy was restored. Comparing and contrasting the history, programs, methods, and goals of Brazil's Cold War-era authoritarian government with the military regimes of Peru, Chile, Argentina, Bolivia, and Uruguay, authors Herbert Klein and Francisco Vidal Luna offer a fascinating, detailed analysis of the Brazilian experience from 1964 to 1985, one of the darkest, most difficult periods in Latin American history.

Herbert S. Klein, Gouveneur Morris Professor Emeritus of History, specializes in the social, demographic, and economic history of Latin America. He received his B.A. from the University of Chicago in 1957 and his Ph.D. from Chicago in 1963. He is the author of some 20 books and 165 articles in several languages on Latin America and on comparative themes in social and economic history. Among these books are four comparative studies of slavery, the most recent of which are African Slavery in Latin America and the Caribbean (1986, 2d ed. Co-authored, 2007),

He has also published on such diverse themes as The American Finances of the Spanish Empire, 1680-1809 (1998), A Population History of the United States (2004) and most recently co-authored, Hispanics in the United States, 1980-2005 (2009). His long-term interests are in comparative economic and social history, and he is currently working on 20th century social change in Latin America and the United States. Aside from courses on Latin America, he gave classes on Quantative Methods in Historical Research and Demographic History.

He has taught full terms as well at the Universities of Toronto, Buenos Aires, La República in Uruguay (two terms in different years), Universidad de San Andrés (Argentina). and Univerisdade de São Paulo (several terms); as well as the Hebrew University of Jerusalem; L'École des Hautes Etudes en Sciences Sociales (Paris) (two terms in different years); Universidade Federal de Minas Gerais, Universidade Federal de Paran, the Colegio de México and at the Universidad Mayor de San Andrés in La Paz, Bolivia. He has been a Guggenheim fellow, a Woodrow Wilson Fellow, a Fulbright Lecturer several times and was a post-doctoral fellow at Yale and Oxford; and since 2003 is editor of the Latin American monograph series of Cambridge University Press.