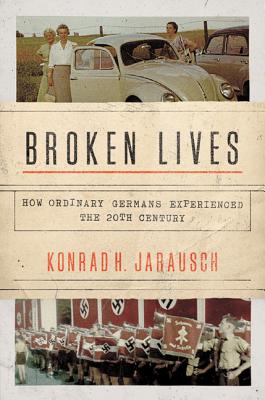 The gripping stories of ordinary Germans who lived through World War II, the Holocaust, and Cold War partition--but also recovery, reunification, and rehabilitation

Broken Lives is a gripping account of the twentieth century as seen through the eyes of ordinary Germans who came of age under Hitler and whose lives were scarred and sometimes destroyed by what they saw and did. Drawing on six dozen memoirs by the generation of Germans born in the 1920s, Konrad Jarausch chronicles the unforgettable stories of people who not only lived through the Third Reich, World War II, the Holocaust, and Cold War partition, but also participated in Germany's astonishing postwar recovery, reunification, and rehabilitation. Written decades after the events, these testimonies, many of them unpublished, look back on the mistakes of young people caught up in the Nazi movement. In many, early enthusiasm turns to deep disillusionment as the price of complicity with a brutal dictatorship--fighting at the front, aerial bombardment at home, murder in the concentration camps--becomes clear. Bringing together the voices of men and women, perpetrators and victims, Broken Lives reveals the intimate human details of historical events and offers new insights about persistent questions. Why did so many Germans support Hitler through years of wartime sacrifice and Nazi inhumanity? How did they finally distance themselves from this racist dictatorship and come to embrace human rights? Jarausch argues that this generation's focus on its own suffering, often maligned by historians, ultimately led to a more critical understanding of national identity--one that helped transform Germany from a military aggressor into a pillar of European democracy. The result is a powerful account of the everyday experiences and troubling memories of average Germans who journeyed into, through, and out of the abyss of a dark century.
Broken Lives: How Ordinary Germans Experienced the 20th Century

Konrad H. Jarausch has written or edited about forty books in modern German and European history. Starting with Hitler’s seizure of power and the First World War, his research interests have moved to the social history of German students and professions German unification in 1989/90, with historiography under the Communist GDR, the nature of the East German dictatorship, as well as the debate about historians and the Third Reich.

More recently, he has been concerned with the problem of interpreting twentieth-century German history in general, the learning processes after 1945, the issue of cultural democratization, and the relationship between Honecker and Breshnew.