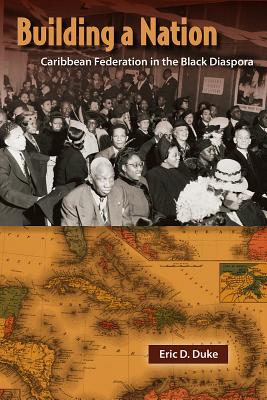 Building a Nation: Caribbean Federation in the Black Diaspora

The initial push for a federation among British Caribbean colonies might have originated among colonial officials and white elites, but the banner for federation was quickly picked up by Afro-Caribbean activists who saw in the possibility of a united West Indian nation a means of securing political power and more. In Building a Nation, Eric Duke moves beyond the narrow view of federation as only relevant to Caribbean and British imperial histories. By examining support for federation among many Afro-Caribbean and other black activists in and out of the West Indies, Duke convincingly expands and connects the movement's history squarely into the wider history of political and social activism in the early to mid-twentieth century black diaspora. Exploring the relationships between the pursuit of Caribbean federation and black diaspora politics, Duke convincingly posits that federation was more than a regional endeavor; it was a diasporic, black nation-building undertaking--with broad support in diaspora centers such as Harlem and London--deeply immersed in ideas of racial unity, racial uplift, and black self-determination. A volume in this series New World Diasporas, edited by Kevin A. Yelvington
Building a Nation: Caribbean Federation in the Black Diaspora

He completed his B.A. and M.A. at Florida State University and earned his Ph.D. in Comparative Black History from Michigan State University. Duke’s research specializations include Afro-Caribbean, African American, and African Diaspora histories. He is the coeditor of Extending the Diaspora: New Histories of Black People (University of Illinois Press, 2009) and has also published work in New West Indian Guide.