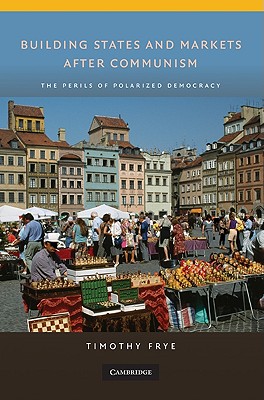 Building States and Markets After Communism: The Perils of Polarized Democracy

Does democracy promote the creation of market economies and robust state institutions? Do state-building and market-building go hand in hand? Or do they work at cross-purposes? This book examines the relationship between state-building and market-building in 25 post-communist countries from 1990 to 2004. Based on cross-national statistical analyses, surveys of business managers, and case studies from Russia, Bulgaria, Poland, and Uzbekistan, Timothy Frye demonstrates that democracy is associated with more economic reform, stronger state institutions, and higher social transfers when political polarization is low. But he also finds that increases in political polarization dampen the positive impact of democracy by making policy less predictable. He traces the roots of political polarization to high levels of income inequality and the institutional legacy of communist rule. By identifying when and how democracy fosters markets and states, this work contributes to long-standing debates in comparative politics, public policy, and post-communist studies.
Building States and Markets After Communism: The Perils of Polarized Democracy

Timothy Frye (Ph.D., Columbia, 1997) is the Marshall D. Shulman Professor of Post-Soviet Foreign Policy.  Professor Frye received a B.A. in Russian language and literature from Middlebury College, an M.I.A. from Columbia's School of International and Public Affairs, and a Ph.D. in Political Science from Columbia.

His research and teaching interests are in comparative politics and political economy with a focus on the former Soviet Union and Eastern Europe. He is the author of Brokers and Bureaucrats: Building Markets in Russia, which won the 2001 Hewett Prize from the American Association for the Advancement of Slavic Studies, and Building States and Markets after Communism: The Perils of Polarized Democracy, which won a Best Book Prize from the APSA Comparative Democratization section in 2010; and Property Rights and Property Wrongs: How Power, Institutions, and Norms Shape Economic Conflict in Russia, which was published in 2017.

His most recent book is Weak Strongman: The Limits of Power in Putin’s Russia.  He co-directs the International Center for the Study of Institutions and Development at the Higher Economics School in Moscow and edits Post-Soviet Affairs.