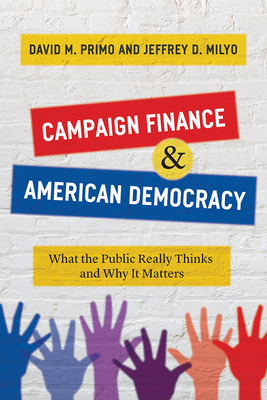 Campaign Finance and American Democracy: What the Public Really Thinks and Why It Matters

In recent decades, and particularly since the US Supreme Court's controversial Citizens United decision, lawmakers and other elites have told Americans that stricter campaign finance laws are needed to improve faith in the elections process, increase trust in the government, and counter cynicism toward politics. But as David M. Primo and Jeffrey D. Milyo argue, politicians and the public alike should reconsider the conventional wisdom in light of surprising and comprehensive empirical evidence to the contrary. Primo and Milyo probe original survey data to determine Americans' sentiments on the role of money in politics, what drives these sentiments, and why they matter. What Primo and Milyo find is that while many individuals support the idea of reform, they are also skeptical that reform would successfully limit corruption, which Americans believe stains almost every fiber of the political system. Moreover, support for campaign finance restrictions is deeply divided along party lines, reflecting the polarization of our times. Ultimately, Primo and Milyo contend, American attitudes toward money in politics reflect larger fears about the health of American democracy, fears that will not be allayed by campaign finance reform.
Campaign Finance and American Democracy: What the Public Really Thinks and Why It Matters