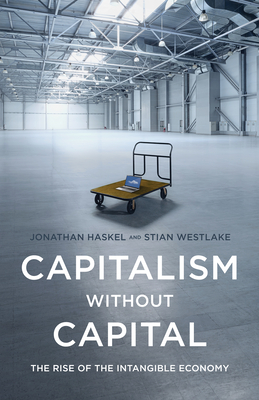 Capitalism Without Capital: The Rise of the Intangible Economy

Early in the twenty-first century, a quiet revolution occurred. For the first time, the major developed economies began to invest more in intangible assets, like design, branding, R&D, and software, than in tangible assets, like machinery, buildings, and computers. For all sorts of businesses, from tech firms and pharma companies to coffee shops and gyms, the ability to deploy assets that one can neither see nor touch is increasingly the main source of long-term success. But this is not just a familiar story of the so-called new economy. Capitalism without Capital shows that the growing importance of intangible assets has also played a role in some of the big economic changes of the last decade. The rise of intangible investment is, Jonathan Haskel and Stian Westlake argue, an underappreciated cause of phenomena from economic inequality to stagnating productivity. Haskel and Westlake bring together a decade of research on how to measure intangible investment and its impact on national accounts, showing the amount different countries invest in intangibles, how this has changed over time, and the latest thinking on how to assess this. They explore the unusual economic characteristics of intangible investment, and discuss how these features make an intangible-rich economy fundamentally different from one based on tangibles. Capitalism without Capital concludes by presenting three possible scenarios for what the future of an intangible world might be like, and by outlining how managers, investors, and policymakers can exploit the characteristics of an intangible age to grow their businesses, portfolios, and economies.
Capitalism Without Capital: The Rise of the Intangible Economy

onathan Haskel is Professor of Economics at Imperial College Business School, Imperial College London and Director of the Doctoral Programme at the School.  He was previously Professor and Head of Department at the Department of Economics, Queen Mary, University of London.  He has taught at the University of Bristol and London Business School and been a visiting professor at the Tuck School of Business, Dartmouth College, USA; Stern School of Business, New York University, USA;  and visiting researcher at the Australian National University.

Since 1st February 2016, he has been a non-Executive Director of the UK Statistics Authority.

Between 2001-2010 was a Member, Reporting Panel of the Competition Commission (now the Competition and Markets Authority), on market inquiries into Mobile Phones, Home Credit and Airports, and the EMAP/ABI merger.

He has been on the editorial boards of Economica, Journal of Industrial Economics and Economic Policy.

My main research interests are productivity, innovation, intangible investment and growth.  I currently study (a) how much firms investment in “intangible” or "knowledge" assets, such as software, R&D and new business processes (b) how much such investment contributes to economic growth as whole and (c) what public policy implications there might be, especially for science policy.  This work uses a mix of data at the levels of company, individual, industry and whole economy.